Protests are growing in Ukraine for the "Orange Revolution" government to step down, as the economic crisis deepens in the country. 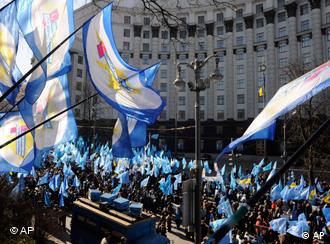 Around 20,000 protestors rallied in the market square of the capital Kyiv on Friday, to demand the resignation of Ukraine's pro-Western government and condemn its handling of the economic crisis.

On Thursday Yanukovich had renewed calls for current premier Julia Tymoshenko to resign. Her power struggle with President Viktor Yushchenko has led to political turmoil in the former Soviet republic.

Yanukovich, who is expected to run in upcoming presidential elections, drew an enthusiastic response when he addressed the crowd in Kyiv.

"The situation is really bad,” he said, “a third of our industry has come to a halt!”

Early elections to be held

Protestors also demanded that President Viktor Yushchenko step down. His approval ratings have fallen to around three percent amid growing anger over the global economic crisis and government infighting.

Earlier this week the Ukrainian parliament decided to hold presidential elections on October 25. Yushchenko had wanted to delay the vote until January 2010, but has since said he may be open to early elections, as long as parliamentary elections were held at the same time.

Yanukovich's Party of Regions, anchored in the country's Russian-speaking east, is currently the strongest political force in parliament.

At Friday's protests, the opposition set April 14 as the deadline for the government to take effective steps to bring Ukraine out of its financial crisis, which threatens the country with bankruptcy.