From distributing cassettes of TV magazines to broadcasting up-to-date, round-the-clock programs via satellite in four languages, Deutsche Welle's television presence has expanded significantly since its start in 1963. 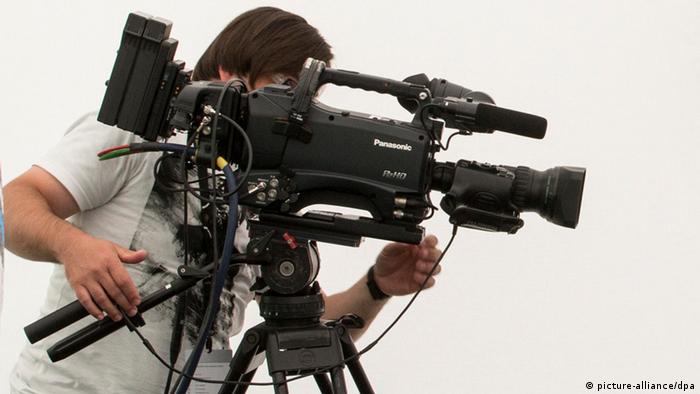 On February 6, 2012, DW went on air with a completely new television lineup. Viewers around the world can now receive TV content from Germany on six channels. A comprehensive multimedia lineup tailored to regional markets along with clearly structured channels in different languages form the foundation of DW's international presence. The feedback received from viewers and partner stations indicates that the new structure of DW's programming is a success, which strengthens its international market position.

Deutsche Welle has been in the global television business since 1963. Back then it first distributed a translated version of a German film report from its headquarters in Cologne. TransTel was set up as a company for transcription and distribution of German TV productions. As one of TransTel's partners, DW was responsible for selecting and editing the programs as well as for acquiring rights abroad. In 1983, DW started producing its own television programs. In 1998, TransTel was dissolved and its activities were completely integrated into DW under the new brand DW-TRANSTEL. In this way, hundreds of hours of programming in many languages go out to the world every year. Adaptation and distribution are managed in Berlin.

April 1, 1992 marked the start of a new era in DW's television history: on that day, DW began internationally broadcasting German-produced TV news from Berlin via satellite. DW-TV, as DW’s television branch was known up to 2012, was the successor to Berlin's RIAS-TV. The broadcaster was integrated into Deutsche Welle as part of the reorganization of the German broadcasting landscape following the country's reunification. DW's broadcast initially went out in German and English for six hours per day. A few months later, the airtime was increased to 14 and then to 16 hours. Spanish was added as a third broadcast language. Since 1995, the DW's TV programs can be received worldwide around the clock.

Today, DW broadcasts its basic program around the clock in English to North America, Africa, Asia and Australia. In addition, there are channels with a mix of languages available in certain regions. One channel includes 20 hours in German and four in English for North and Latin America as well as for Asia. For the Arab World, there are 10 hours in Arabic and 14 in English. And for Latin America, DW broadcasts 20 hours of television programming daily in Spanish and four in German. Its European channel offers 18 hours in English and six in German.

The news program Journal has been the flagship of the international television lineup since the beginning. Viewers around the world can find out in German, English, Spanish and Arabic what's making headlines in Germany and Europe. There are also news reports about political developments throughout the world and the latest from business, culture and sports. Additionally, DW television explores a wide range of topics in its magazine programs, reports and documentaries. Talk shows delve deeper into the latest events and developments.

Since 2007, Deutsche Welle has been taking over more and more material from Germany’s domestic broadcasters ARD and ZDF. This cooperation will be intensified in the future.

Since 2011 DW has been expanding its television offerings beyond its satellite TV lineup. For an increasing number of countries, DW is producing TV magazines with regionalized content in the languages of the local target audiences. The first program in this format was the TV magazine Europe Today in Romanian, launched in the fall of 2011, which is aired throughout Romania by public broadcaster TVR Info. There are also versions in Albanian and Croatian that expand the TV lineup for Southeastern Europe. These can also be viewed on partner stations.

DW takes a similar new approach on other continents, too. It has been present on the Indian TV market since 2012 with its science magazine Manthan in Hindi. In Brazil, the Portuguese-language magazine Futurando presents the latest developments and trends in science, technology and the environment. The 15-minute Russian-language program Geofaktor deals with German, European and Russian political and economic topics.

Germany's international television programming can be viewed in millions of homes. More than 3,000 partner stations on all continents rebroadcast DW's TV content. In Asia alone, DW is included in the schedules of over 1,000 cable networks. The content is also available worldwide as Livestream, and many programs can also be accessed on the web as video-on-demand or podcasts. DW’s programs have also been included on the websites of many online partners.