In Tanzania almost half of women under 50 say they have been physically or sexually assaulted at some point in their lives. In response, police are expanding their "gender desk" program. 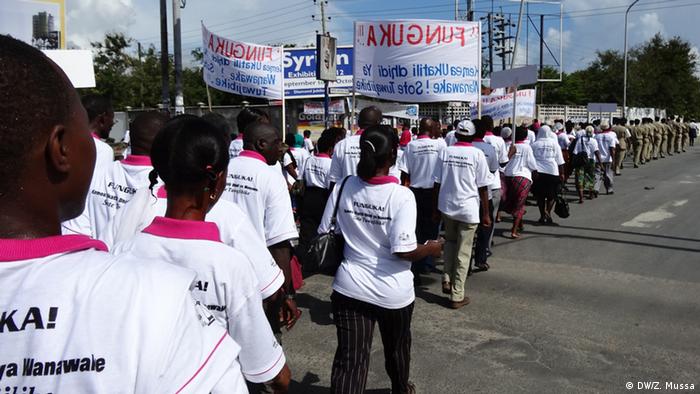 Demonstrating against gender based violence in Dar es Salaam

Zawadi Karim bears physical and emotional scars following a harrowing attack she suffered in mid-November, when her aunt repeatedly assaulted her with a club after she had accused her of stealing some money.

“I don't want to remember that day, I was close to death but thank God with the help of a neighbor I was able to escape” she said.

Karim, whose mother passed away many years ago, sustained serious injuries before she was rescued from her home in Iringa region, which lies some 500 kilometers (310 miles) from Tanzania's commercial capital Dar es Salaam.

Narrating her ordeal, Karim said when she woke up one day her aunt ordered her to remove her clothes, and started slicing her with pieces of sharp glass while hitting her randomly.

“I didn't steal any money, I don't understand why my aunt hated me like that. She hit me hard. When I tried to defend myself, she threatened to kill me,” Karim told DW.

The girl, who has received psychological counseling at Kihesa police gender desk, said she is confident that justice will be done now that the matter is in police hands

Karim's plight tells a grim story of thousands of women and children in Tanzania who are being subjected to gender related violence.

A survey carried out by Tanzania Media Women's Association (TAMWA) last year suggested that lack of awareness, coupled with the existing gaps in the reporting system, was contributing to the increase in gender violence

TAMWA is a nonprofit organization comprising over 100 female journalists striving to combat child marriages, rape, abandonment and denial of inheritance to women.

Women's rights activists assert that although over 70 per cent of girls and boys experience physical violence before the age of 18 years, most survivors never tell their stories and few cases are reported to the police. 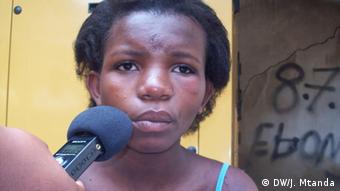 Zawadi Karim was physically assaulted by a relative

There is a high prevalence of gender based violence in Tanzania. According to the Tanzania Demographic and Health Survey conducted in 2010 by the US-based Measure DHS, nearly 45 per cent of 15-49 year old women reported having experienced physical or sexual violence, with husbands and partners cited as common perpetrators.

Meanwhile a survey carried out by Tanzania's Ministry of Community Development, Gender and Children in 2011 highlighted the vulnerability of children to physical and sexual violence in the country where nearly 1 in 3 girls and 1 in 7 boys experience sexual violence, and over 70 per cent of children experience physical violence before the age of 18.

The survey by TAMWA showed that the stigma attached to the victims of gender based violence makes them unwilling to report such incidents. Some parents use it as an opportunity to extort money from the suspects.

TAMWA managing director Valerie Msoka says that gender based violence is being fueled by cultural factors rooted in the male dominated system which give men an upper hand to violate the rights of others with impunity.

“We need to promote positive behaviors at individual, family and community levels if we are to stop violence against women and children,” Msoka said.

She added that communities must take action to end all forms of violence by promoting gender equity.

In a bid to curb the rising wave of violence against women and children, the police force in Tanzania has launched a new three-year action plan on gender based violence.

The plan is designed to encourage trained police officers to speed up investigations and prosecution of gender related cases.

“The police force is committed to improving its response to survivors of gender based violence and victims of child abuse. To encourage survivors and victims to speak out, every police station needs to be a place where they feel safe, comfortable and supported,” said Inspector General of Police, Saidi Mwema. He was speaking at the launch of the plan in Dar es Salaam, which coincided with "16 days of activism against gender violence," an annual global campaign for women's rights.

The Tanzanian police force estimates that the gender desks will serve over 12,000 victims of abuse.

As part of its strategy, the police have identified six priority regions of Dar es Salaam, Iringa, Kilimanjaro, Mara, Mbeya and Mwanza where gender violence is rife.

Gender desks are dedicated units in each police station consisting of reception area, interview and counseling room, resting area and an office. They are manned by women police officers. 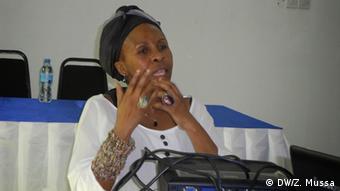 Christine Onyango, who is responsible for gender and children affairs at police headquarters in Dar es Salaam, told DW that the police's vision was to ensure every single station in the country effectively handles gender cases and child abuse by helping victims to secure justice.

“There seems to be an increase in awareness among society members as more people are willing to report incidents of abuse committed against them,” she said.

She also said that they trained over 1,000 officers, who would be required to remain on the desk for a minimum of three years to gain experience of handling gender issues. Nonetheless some Tanzanians doubt whether this scheme will lead to a improvement in the standard of justice.

Magdalena Sawale, a gender activist and independent consultant working with a number of gender organizations, said, given the high level of corruption that has engulfed law enforcement agencies, people will have every reason to doubt the implementation of this program.

“I am not saying it is a bad thing, but nobody can dispute that corruption is still widespread within the police force, which makes it difficult to believe if the handling of gender cases will not be compromised," she told DW.

Police gender desks have also been established in Kenya and Rwanda.

According to a fresh report by Human Rights Watch, Tanzania has had a massive problem with child labor in the African nation's gold mines. The international watchdog spoke of brutal exploitation and sexual abuse. (28.08.2013)

Many women are victims of violence in the home, committed by their partners, and it is more widespread than previously thought. The WHO has published new figures on domestic abuse - and the results are alarming. (24.06.2013)

Mosquito nets remain our best defense against the disease. In Tanzania, nets are produced locally, but the country relies on international help to distribute them among the people. (06.08.2013)