The Taliban and Western diplomats are meeting in Norway, with the fundamentalist group pushing to unfreeze Afghan assets abroad. The gathering comes as Afghanistan faces a dire humanitarian crisis. 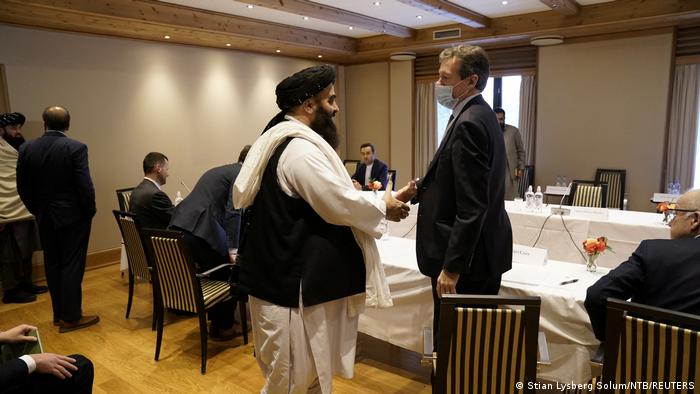 The Taliban and Western diplomats launched high-level talks in Oslo on Monday, according to the Norwegian Foreign Ministry.

The Taliban's delegation, led by acting Foreign Minister Amir Khan, met with envoys from the US, France, UK, Germany, the EU and Norway.

It's the first talks that Western officials have held with the Taliban since the extremist group seized control of Afghanistan last August.

Khan told reporters in Oslo on Monday that the meeting is "an achievement in itself" for the Taliban.

"Norway providing us this opportunity is an achievement in itself because we shared the stage with the world," he said. "From these meetings we are sure of getting support for Afghanistan's humanitarian, health and education sectors."

Talks with Taliban 'a step to legitimize the Afghan government,' Taliban official says

How do the two sides view the negotiations?

The Taliban are urging the US and other countries to unblock nearly $10 billion (€8.8 billion) in frozen Afghan assets. The group says these funds are needed to tackle the country's dire humanitarian crisis.

Escaping the Taliban: From Afghanistan to Germany

Western countries, meanwhile, are urging the Taliban to respect the rights of women and girls. Western powers are also pushing the group to share power with ethnic and religious minorities in the country.

During the talks on Monday, the Taliban denied allegations that they arrested two Afghan women's rights activists, Norwegian media reported.

The three-day discussions began on Sunday, with the Taliban meeting representatives from civil society.

The Taliban took control of Afghanistan in August, as the US and other NATO countries attempted to pull out their military and diplomatic personnel from the country.