Islamic insurgents killed several civilians and a policeman during a battle in a court building in Ghazni, eastern Afghanistan. The latest attack comes after the Taliban kidnapped dozens in Kunduz. 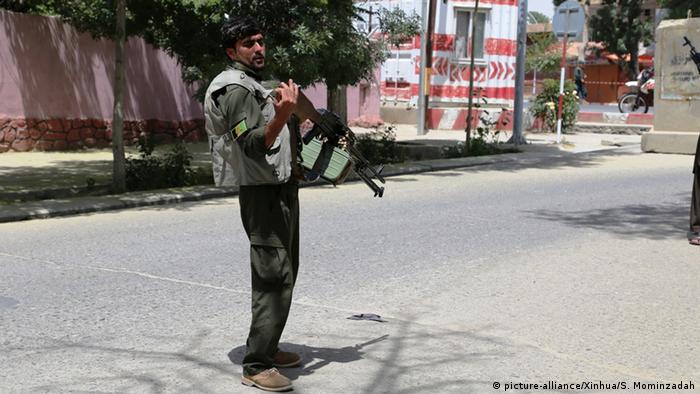 The raid started when a suicide bomber detonated his charge at the gate to the court and four more attackers forced their way inside, Ghazni officials said on Wednesday.

All of the assailants died in the subsequent shootout.

"Four civilian visitors and a policeman were killed in the attack but our forces were on high alert and shot dead the other bombers in no time," said city police chief Aminullah Amarkhil.

He added that the police were defusing "a van full of explosives" that the terrorists planned to use in the attack.

The Taliban claimed responsibility for the attack.

The militant group has been increasingly targeting court officials in both Afghanistan and Pakistan. Several days ahead of the Wednesday incident, the insurgents vowed to avenge six of their prisoners who were hanged for terrorism in May.

In a separate attack on Wednesday, Taliban killed district police chief Bismullah Khan in the northern Balkh province. Khan died when his vehicle was struck by a roadside bomb, police general Abdul Razaq Qaderi said. At least three other policemen were wounded.

Wednesday's attacks followed only a day after the Taliban ambushed three buses in Kunduz, forcing passengers to disembark. The militants killed at least 16 people, according to the AFP news agency. Dozens of passengers were kidnapped and their fate was not immediately clear.

The Taliban continue to escalate their attacks of government forces despite the recent change in Taliban leadership. Last week, the islamist faction was forced to elect religious scholar Haibatullah Akhundzada as a new commander after the US killed Mullah Akhtar Mansour in a drone strike.

Some experts say the appointment of the new Taliban leader was done hastily to avoid power struggles within the group. The spokesman for a breakaway Taliban faction says Akhundzada is not representative of the jihadists. (26.05.2016)