German Chancellor Angela Merkel meets the UN Representative for Afghanistan Tom Koenigs Tuesday with the fierce debate over the Bundeswehr deployment raging across the political divide. 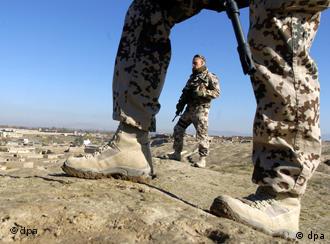 Germany's political parties are on a collision course over the future of the country's involvement in Afghanistan in the light of recent attacks, kidnappings and German deaths.

As German Chancellor Angela Merkel prepares to meet UN representative to Afghanistan Tom Koenigs on Tuesday to discuss the situation, the debate over the future of German forces engaged in missions as part of the wider, US-led "Operation Enduring Freedom" (OEF) rages behind the scenes.

Merkel's government has rejected all calls for its armed forces to be pulled out of Afghanistan but those who are becoming increasingly vocal in their opposition, such as the Social Democratic Party (SPD) and the Greens, are unlikely to be brushed off so easily.

The SPD, the other party in Merkel's grand coalition government, are vociferously against the Bundeswehr being involved in any US-controlled anti-terror operation, and the Greens continue to hold their previous stance of rejecting out-right the mandate that sent German troops overseas as part of OEF. Meanwhile, the left-wing alliance Left Party has called for an immediate removal of the armed forces.

Public opinion is also being affected by the reports of increasing danger to Germans overseas. A recent survey showed that some 60 percent of Germans support pulling Bundeswehr troops out of Afghanistan.

At the moment, the government refuses to budge saying that the increased targeting of German personnel in Afghanistan, both military and civilian, is a tactic employed by the Taliban to provoke a debate over a withdrawal.

Merkel and government staying the course 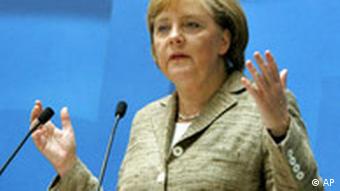 Despite the recent German casualties, Merkel said German troops will stay in Afghanistan

Merkel herself has said that the government will not respond to blackmail and that German troops were in Afghanistan as a matter of international and domestic security.

"We are there because German security is also being protected over there," Merkel said in an interview with public broadcaster ARD. "It is our concept to combine military issues with reconstruction."

With the Bundestag to decide on the extension of the Bundeswehr's mandate in Afghanistan in the fall, some security experts, most notably the Bundeswehr's Chief of Staff Wolfgang Schneiderhan, have warned that the Taliban is likely to increase its pressure in a bid to influence the outcome of the coming parliamentary debate. 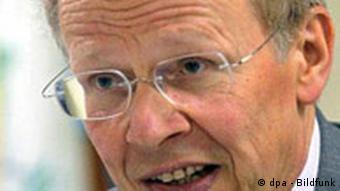 Koenigs could not say if Germans were specific targets

However, speaking ahead of his meeting with Merkel, UN Representative Koenigs could not say whether there was a concerted effort to influence the debate by specifically targeting Germans in Afghanistan or if the current activity towards them will continue.

"The uprising is directed against the government as well as against the international community which it supports," Koenigs told German public broadcaster NDR. "But I do not see a general hostility towards foreigners yet. Of course, those softer targets and those least defended, such as foreign tourists and workers, are in the most danger and this is certainly a problem."

Koenigs did, however, admit that the Taliban was acutely aware of the power of its actions in the wider political domain.

"The Taliban are of course very well versed in the media," he added. "And every reaction by a perceived enemy state is regarded as a victory and of course used as such. These Taliban forces are very engaged politically." 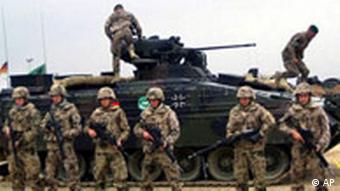 The UN representative also said he was in favor of keeping German troops in Afghanistan and dismissed talk of "Iraqization" -- the concerted targeting of foreign nationals as kidnap victims and high-profile, ideologically motivated kills -- in Afghanistan.

He called on Germany to extend its mandate when the time came, both military as part of the International Security and Assistance Force (ISAF) and as part of the reconstruction efforts.

"We have done the right thing," Koenigs said. "We should stay the course, even if there is danger, even if we have some difficult times ahead. Despite the dangers and difficulties, we are also welcomed in Afghanistan.

"I found the decision of the German Society for Technical Collaboration (GTZ) to continue with reconstruction efforts in the south to be particularly helpful," he continued. "Applying German technical know-how leads to a certain stabilization and, above all, it shows the people that it is worthwhile to cooperate with the international community."

A German hostage reported to have been killed by Taliban militants is still alive along with four Afghans, but they will be killed unless Germany pulls its troops out of Afghanistan, a Taliban spokesman said. (23.07.2007)

The German military will not turn its back on Afghanistan despite suffering its worst casualties for four years in a suicide bombing, politicians from the governing coalition said on Sunday. (20.05.2007)