The German Foreign Ministry has removed the Taiwanese flag from its website where it describes bilateral relations. Taiwan has expressed its displeasure, citing how other territorial flags remain. 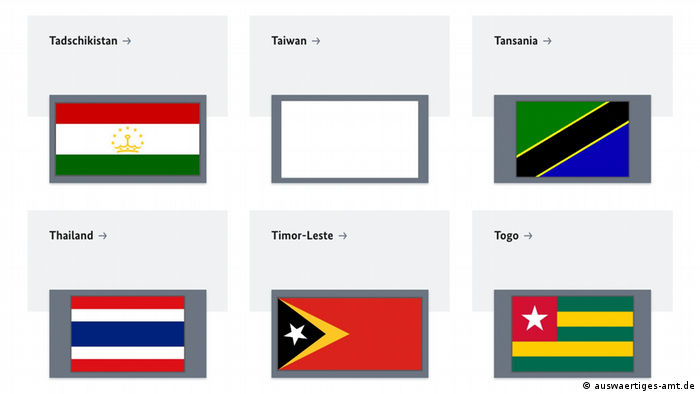 Taiwan on Monday reacted with dismay to the German Foreign Ministry's decision to remove the Taiwanese national flag from its website.

The national or territorial flags of all other countries and territories, including China's Hong Kong and Macao special administrative zones, are on the ministry website. But there is a blank space on Taiwan's page where an image of its flag had previously appeared.

Citing the different treatment of Taiwan in comparison with other countries and territories, spokeswoman Ou said her ministry "cannot accept this kind of discrimination."

Ou's comments, carried by the German DPA news agency, came in the wake of media reports that an image of Taiwan's national flag had been taken down from the website that describes Berlin's bilateral relations.

German ministry spokesman Rainer Breul answered a question about the issue in a July 10 press conference, stating the alteration had been made because "we have a one-China policy," according to the state-owned Radio Taiwan International (RTI) and media outlet Taiwan News.