At least 24 people have been killed and 270 others injured in a series of underground gas explosions in Taiwan. The blasts came after local residents had reported smelling the scent of gas. 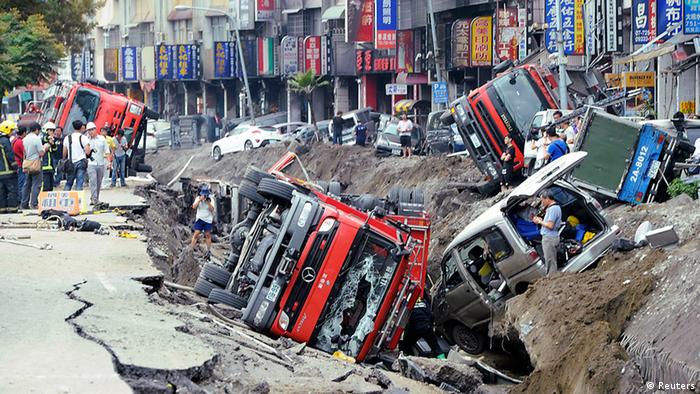 Thousands of emergency workers and soldiers were deployed to Kaohsiung, Taiwan's second-largest city on Friday, where an operation was ongoing to search for both survivors and victims of the blasts.

Four firefighters who had been called to the area to investigate a possible gas leak were reported to have been among those killed in the explosions, which occurred several hours after their arrival.

The blasts, which occurred in a district of Kaohsiung that is packed with shops and apartment buildings, hurled concrete and vehicles through the air and ripped open large craters in several streets.

Taiwan's minister of economic affairs told a press conference on Friday, that the source of the blasts appeared to have been a gas that is a by-product of the processing of fossil fuels.

"Based on our preliminary investigation, the gases spilled included propene," Chang Chia-juch said.

Urban gas pipes to be checked

The gas line that exploded belongs to the state-owned CPC Corporation, according to the Associated Press. The source and cause of the leak was not immediately clear.

Whatever the cause of the blast, Tiawan's president, Ma Ying-jeou pledged that all pipes used by petrochemical companies under urban areas would be checked to avoid a recurrence of the incident.

"We will make further arrangements and inspections to avoid this kind of disaster from occurring again," President Ma said in comments broadcast on Taiwanese television.

The president also expressed his condolences to the families of the victims.

A fire overnight in southern Taiwan has killed at least 46 people and injured dozens more. The cause of the blaze, which is the island's deadliest in decades, is not yet known. More than 70 fire trucks were sent to the scene.