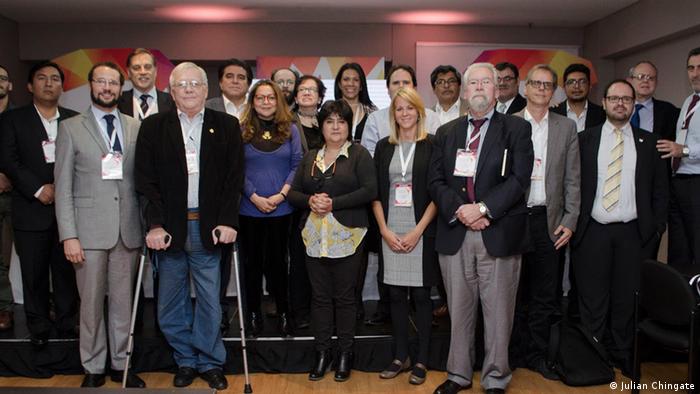 In 2015, more than 130 people involved in Latin America's media sector came together to discuss the central problems facing the region's media environment.

The unique event brought together civil society and media watchdog members, broadcast regulators, academics, media industry representatives and government officials. The aim of the two-day consultation was to hear directly from local stakeholders what issues hamper media freedom in the region and how the international donor community can help.

The event, held in the Colombian capital, Bogotá, was organized by DW Akademie and the US-based Center for International Media Assistance (CIMA) as part of the larger project, "Media Development and the Governance Debate: Reframing the Agenda".

The idea driving the project is that asking people on the ground to diagnose the problems and their underlying causes will enable development organizations to better identify and implement measures that address these issues.

Don Podesta, then at CIMA, put together the discussions from the Bogotá consultation into a report, Media in Latin America: A Path Forward (also available in Spanish). Here he gives #mediadev an overview of the report's findings and talks about the project's future.

#mediadev: What were the main results of the regional consultation in Bogotá?

Don Podesta: The outcome was a shared understanding by the media development and freedom of expression community of the three biggest problems facing the media in the region. These are concentration of ownership, lack of transparency and fairness in the regulation of the broadcast media and sustainability of independent media. Following the conference, a number of the participants issued a declaration calling on Latin America's governments to take concrete steps to guarantee freedom of expression and plurality of voices in the media.

Why is it so important to bring together disparate media stakeholders on the ground?

Without the participation of the political sector and government agencies such as broadcast regulators, it is practically impossible to improve the legal environment for media.

The process was launched in Latin America but you have proposed a series of regional consultations – what do the next steps look like?

First of all, we will discuss the very interesting results of the multi-stakeholder event in Bogotá. In September, a similar conference for Asia will be convened in Jakarta, Indonesia, as part of the world conference of the Global Forum for Media Development (GFMD). After that, DW Akademie and CIMA are considering a regional consultation for Africa. Eastern Europe and the countries of the former Soviet Union could, and should, be next on the agenda.

Don Podesta is the Program Officer for Latin America and the Caribbean at the National Endowment for Democracy. Previously he was manager and editor at CIMA.

This article is part of the #mediadev series "Building coalitions for media reform" where experts from the field of media, academia and development discuss the impact and interaction of media with other governance issues - and how media can fit into the broader development agenda.

Creating a supportive legal environment for the media sector needs more than traditional legal reform. It requires taking into account the local context and the diverse stakeholders and their attitudes to the media. (14.09.2016)