Syria′s civil war is threatening Lebanon | World| Breaking news and perspectives from around the globe | DW | 06.08.2014

The Lebanese military is fighting jihadists from Syria. It wants to prevent Syria's war from spilling over into Lebanon for good. But complicated confessional loyalties in the country make this a difficult task. 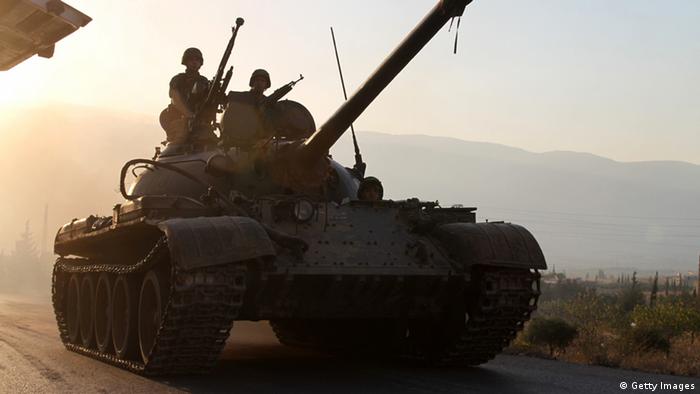 The war in Syria crosses the border into Lebanon more and more often: Last weekend, Syrian fighters from the Sunni terror groups "Al-Nusra Front" and "Islamic State" ("IS," formerly known as "ISIS") were in heavy fighting with the Lebanese military. The battles surrounding the village of Arsal close to the Syrian border went on for three days. Fourteen soldiers were killed and more than 80 were injured. On the other side, 50 jihadists were killed.

The fighting is the heaviest so far in a region that has seen violent clashes between Sunni fighters and Shiite Hezbollah militias for months. Now the Lebanese army has announced a 24-hour ceasefire.

Lebanese Prime Minister Tammam Salam said his country was counting on military strength in the fight against terror. He stated there would not be a political solution. "The only solution is the withdrawal of radicals from Arsal and the surrounding areas," Salam said.

To achieve this goal, Lebanon has asked France to send agreed upon weapon deliveries immediately.

"The battle requires equipment, material and technology that we do not have," Lebanese army chief Jean Kahwaji said. "That's why we need to expedite the deliveries." 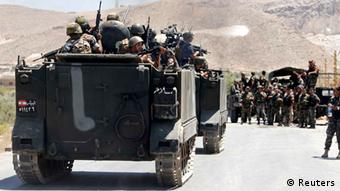 The Lebanese military is advancing on Arsal

Salam hopes his no-holds-barred approach will prevent the Syrian civil war from spilling over into Lebanon for good. But that's exactly what jihadists seeping into Lebanon from Syria want.

They're hoping that attacking the Shiite population in the border area to Syria will provoke the Shiites to, in turn, attack their Sunni countrymen. The jihadists are also attempting to garner the Lebanese Sunni's solidarity by fighting the Lebanese military. This way, they plan to stir up confessional violence.

The dream of a cross-border "caliphate"

With the violence boiling between the two confessional groups, the jihadists have reached their first goal: weakening the Lebanese state. A state shaken by confessional violence or civil war hardly has the means to fight against the militants' advance.

That's what fighters of the "Islamic State" and the "Al-Nusra Front" have also experienced in Syria and Iraq. They've grabbed power in large parts of the countries. Hundreds of thousands of Syrians and Iraqis are fleeing them, because they don't want to live in the "caliphate" that the terrorists have established on both sides of the Syrian-Iraqi border.

Now the militants want to use this tactic to lay the foundation for the Islamic state to which they refer to in their name ("IS") in Lebanon as well. 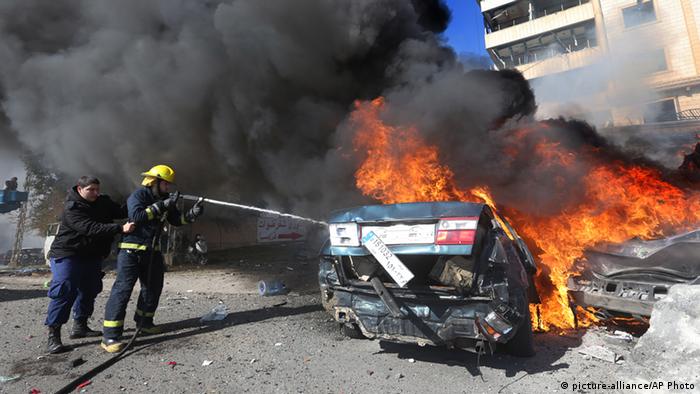 War has reached the capital: bombing in Beirut

With their tactics, the terrorists benefit from the confessional characteristics of the region. After all, the border between Syria and Lebanon isn't based on cultural or confessional differences. Rather, tt was drawn by the colonial powers in accordance with the Sykes-Picot Agreement of 1916. Without regard for the population, the new border solely marked the territories of France and Great Britain.

"One people, two nations" has since become a well-known saying to describe the region. The village of Arsal has become the first victim of this difficult situation, according to Lebanese daily "Al-safir."

The war in Syria affects the Lebanese as well. Sunnis tend to sympathize with the opponents of the Assad regime, the majority of whom are Sunnis. The Lebanese Shiites on the other hand tend to support the Assad regime, whose members are mostly from the Shiite Alawites. The confessional solidarity transcends national borders and religious identity competes with national identity.

When the war broke out in Syria, the Lebanese government had tried to remain strictly neutral. It had hoped that after the civil war from 1975 to 1990, the Lebanese state and society had developed a strong enough identity for all Lebanese to conform to, no matter their confession. And in the beginning, this was the case.

The role of Hezbollah

But when the Assad regime was on the defensive, Shiite Hezbollah militants financed by Iran came to fight at the regime's side. Thousands of them fought against the rebels with Assad's troops. 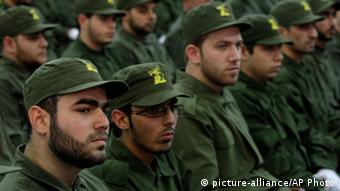 And that's how they pulled Lebanon into the war step by step. Sunni jihadists fired rockets into Lebanese territory, and border towns in Lebanon saw riots between Sunnis and Shiites. The terror even found its way to Beirut in the shape of car bombs.

The goal now is to stop terror's advance on Lebanese soil. In a society as confessionally heated as Lebanon's, that's far from easy. Right now, it's all about preventing Lebanon from falling apart or breaking down, according to newspaper "Al-safir." According to the daily, Lebanon faces its toughest challenge since the end of the civil war in 1990.