Rebels have started a major assault on an important military air base in Syria's northwest. The fighting comes as Washington pushes for an overhaul of Syria's opposition. 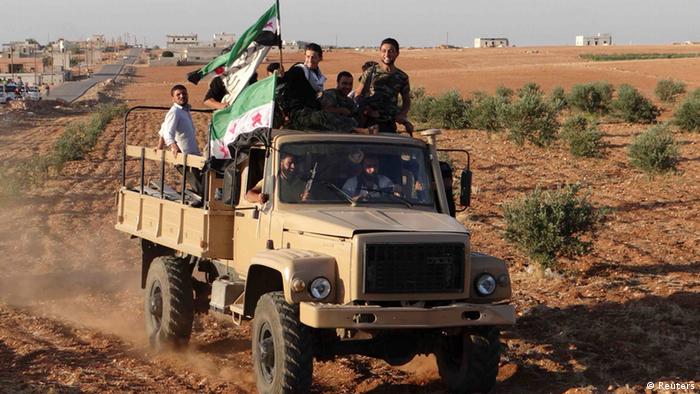 Activists said rebels had on Saturday begun a large-scale offensive against the Taftanaz air base in the northern province of Idlib.

The air base is reportedly used to deploy fighter jets and helicopter gunships against rebel positions.

The new offensive comes a day after rebels gained control of the northwestern town of Saraqeb, according to the Observatory. The town lies at the meeting point of Syria's main north-south highway linking Aleppo with the capital, Damascus, and another road connecting Aleppo with the principal port of Latakia.

The rebels are also reported to have taken three military positions in Douma, a northeastern suburb of Damascus, and an air force position in Idlib.

This comes as a wrangle deepens between Syria's main opposition group and the United States administration, just days before key talks among the opposition in Qatar.

US State Department spokeswomen Victoria Nuland said that while Washington had backed the Syrian National Council (SNC) for more than a year, it now wanted a more broadly-based opposition to the regime of President Bashar Assad.

Nuland said a leadership for a future Syria must include "not only the Sunni population, but the Alawis, the Druze, the Christians, the Kurds, any other minority groups, women."

"This is not a matter of the US dictating," Nuland said, adding that the SNC had struggled to establish its legitimacy as the voice of dissenters inside Syria and those in exile.

Meeting in Jordan's capital, Amman, the SNC accused Washington of "sowing the seeds of division." Among those present was former Syrian premier Riyad Hijab, who defected in August. Syrian activists say he has emerged as a consensus candidate to head a new opposition body.

So far, divisions between Islamists and secularists, as well as between those inside Syria and opposition figures based abroad, have thwarted prior attempts to forge a united opposition.

Another personality tipped to head a new body to be called the Syrian National Initiative is the long-time Syrian dissident Riad Sief. Sief told the news agency Reuters that "an alternative to the regime is dearly needed."

"We are talking about a temporary period that begins with forming a political leadership until a national assembly that represents all Syrians meets in Damascus, once Assad falls," he said.

On Friday, the Observatory said at least 139 people, including 44 civilians, were killed across Syria. It estimates that 36,000 people have lost their lives since the uprising against the rule of President Bashar Assad began in March 2011.