A Syrian rebel faction in besieged eastern Ghouta has started departing the enclave under a deal with the Assad regime. Eighty percent of the Damascus suburb has been taken from rebels in the past month. 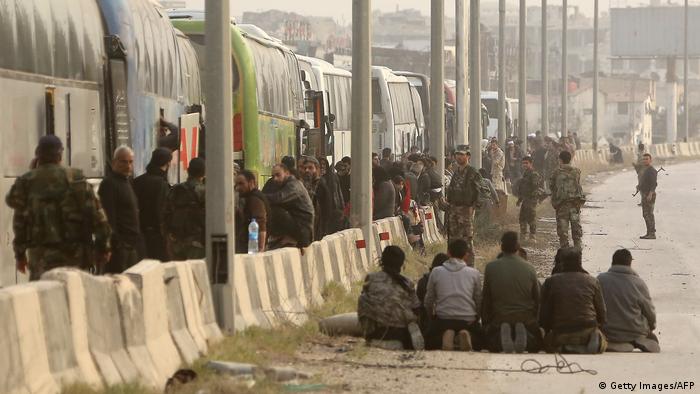 Hundreds of Syrian rebels and their families withdrew from a town in eastern Ghouta on Thursday. The move is part of the first surrender deal in the besieged enclave and will hand control of part of the Damascus suburb to the Syrian government.

Around 30 buses took more than 1,500 people, including about 400 fighters from the ultra-conservative Ahrar al-Sham group out of the town of Harasta.

Around 7,500 people, including 1,500 rebel fighters, will ultimately evacuate the town under a Russian-brokered deal, Syria's pro-government Military Media Unit said. 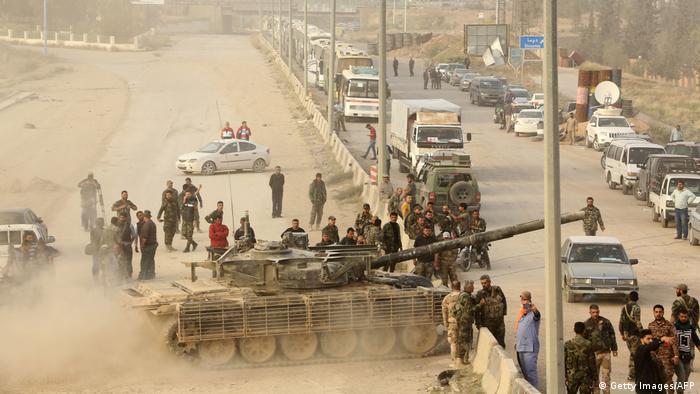 Syrian regime forces watched over the withdrawal. The rebels were allowed to take light weapons with them.

Evacuees will be sent to Idlib, a northwestern province dominated by the al-Qaida-linked Hayat Tahrir al-Sham group and other rebel factions close to Turkey. Around 20,000 civilians are expected to remain in Harasta.

Eastern Ghouta, a collection of towns on the outskirts of Damascus, has been under the control of rival rebel factions for five years.

On February 18, pro-Syrian government forces backed by Russia launched an offensive to retake the enclave.

Since then, rebels have lost 80 percent of their territory and been split into three pockets. After Ahrar al-Sham departs Harasta, the Free Syrian Army-linked Failaq al-Rahman is left in control of the towns of Jobar, Ein Terma, Arbin and Zamalka, while the Army of Islam holds sway over Douma, the largest town in the enclave. There is also a small jihadi presence in the area.

More than 1,500 people have been killed in the eastern Ghouta offensive and in the past week alone more than 50,000 people have fled to government-controlled areas. Meanwhile, rebels have repeatedly launched shells into Damascus, killing scores of civilians.

The eastern Ghouta campaign has seen pro-government forces use similar tactics to those used to the wrest control of other cities from rebels: lay siege, conduct indiscriminate bombings and launch a ground offensive with overwhelming firepower.

The government then tries to reach "reconciliation deals" or evacuations of fighters and their families to Idlib. Similar deals were struck in Homs in 2015 and Aleppo in 2016.

Hundreds of thousands of displaced people currently reside in Idlib, and the region is regularly bombed by Russian and Syrian warplanes.

Meanwhile, Failaq al-Rahman said Thursday it had agreed to a ceasefire starting at midnight in order to negotiate with the Russian side about finding a solution to guarantee the safety of civilians and to guarantee that their suffering stops," the group said.

The announcement may signal the rebel faction may be considering a deal with the regime. The Army of Islam has said it will not negotiate with the government.