Syrian opposition pulls out ahead of Astana peace talks

Representatives of anti-regime forces in Syria have decided to boycott the new round of peace talks in Kazakhstan, accusing Russia and Damascus of breaking the truce. After the move, Damascus pointed a finger at Turkey. 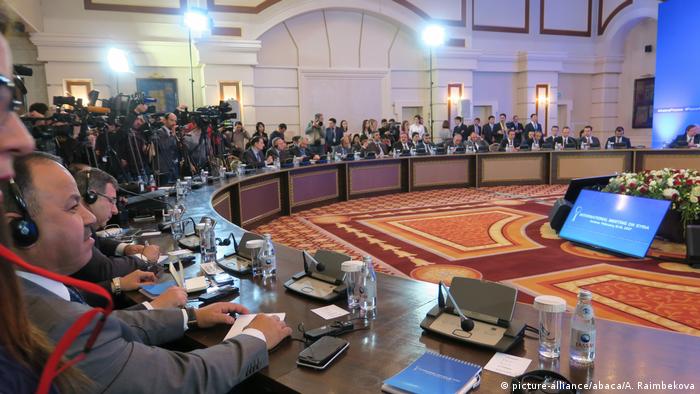 Syrian peace talks in Astana have concluded with Russia, Turkey and Iran striking a deal on a trilateral mechanism to safeguard the ongoing ceasefire. However, Syrian rebels have criticized ongoing government offensives. (24.01.2017)

Talks between Syria's warring sides got off to a rocky start with rebels confirming they would not negotiate face-to-face with the Syrian government. The new push to end the six-year conflict is expected to end Tuesday. (23.01.2017)

The two countries were once on opposite sides in the Syrian conflict, with Ankara opposed to Bashar al-Assad's regime. Turkey still opposes Assad but is cooperating with Russia against the "Islamic State" militants. (10.03.2017)

The opposition's refusal to negotiate was because of their "masters," Syrian regime representative Bashar al-Ja'afari said in Astana on Tuesday. The talks were brokered between regime-backers Iran and Russia on one side, and Turkey on the other, with Ankara serving as the backer of the opposition.

"When one of the three guarantors breaks their commitment - and I mean Turkey - this means that Turkey must be one that is asked about the non-attendance or participation of these armed groups," said Bashar al-Ja'afari, Damascus' chief representative at the Astana peace talks.

He added that the absence of opposition would not affect the summit.

"We are not here to meet the delegation of the armed groups; we are here to meet with our allies from Russia and Iran and show our commitment when it comes to the Astana talks," he told reporters.

Moscow 'surprised' by the boycott

The Syrian opposition pulled out just hours before the talks were set to start, saying that the government and its allies were still bombing rebel-held areas and preparing to storm two districts on the outskirts of Damascus. A big issue was also the withdrawal of Syrian rebels from the Homs district of al-Waer, which is set to start on Saturday. The agreed evacuation comes after bombing by Syrian jets.

"Currently the decision is not to go as a result of Russia continuing its crimes in Syria against civilians and its support of the crimes of the Syrian regime," rebel spokesman Osama Abo Zayd said.

Russian Foreign Minister Sergey Lavrov described their explanation as "unconvincing," and said that the decision to boycott came as a surprise for Moscow.

"We are currently looking into this unexpected development," Lavrov said. "I have spoken to my Turkish colleague (Foreign Minister Mevlut) Cavusolgu yesterday. Our Ministry of Defense is also using its own channels to contact Turkey and commanders of the opposition factions," he said.

Russia has "reasons to believe that this is a misunderstanding, after all," he added.