Moscow blamed the violations, including an attack on the Turkish border, on moderate rebels and "terrorist organizations." Saudi Arabia says Syrian or Russian warplanes have been active in Aleppo and Hama provinces. 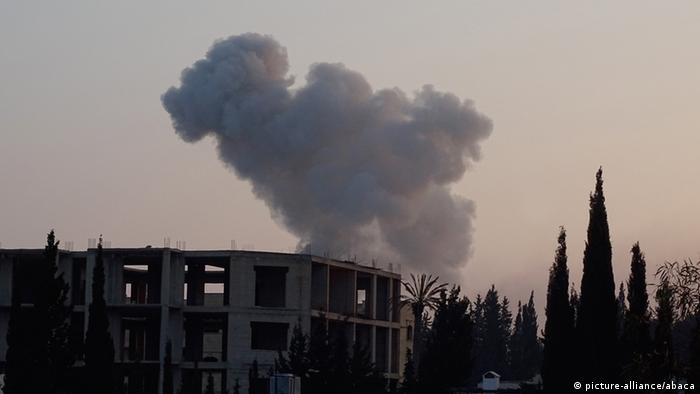 "Over the past 24 hours, nine instances of violations of cessation of hostilities have been uncovered," Russia's defense ministry said on Sunday, citing its coordination center at the Hmeimim airbase in Syria.

The ceasefire was, on the whole, being implemented, it added, but "there are a number of violations by groups of 'moderate' opposition and units of international terrorist organizations."

"The activities of the armed groups were supported by artillery fire from Turkish territory," the chief of the coordination centre, Lieutenant General Sergei Kuralenko, said in a televised address.

Turkey has said it would not be bound by the landmark ceasefire deal, which went into effect on Friday night, if its national security was threatened 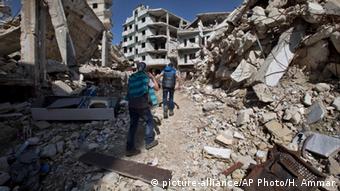 The truce has allowed children to play among the rubble

The ceasefire agreement does not include territory held by the "Islamic State" (IS) jihadist group and Al-Qaeda-affiliated Al-Nusra Front, which together control more than half of the war-ravaged country.

Russia insisted on Saturday it had halted bombing in all areas covered by the truce, but has vowed to keep striking 'IS' and Al-Nusra and other "terrorist groups."

Reports of shelling in Latakia

It quoted a local source saying that the shelling, which came from hills close to the Turkish border where the Al-Nusra Front were deployed, caused a number of casualties.

But a Syrian rebel group denied those reports, saying its fighters were committed to the US-Russian ceasefire deal.

Fadi Ahmad, spokesman for the First Coastal Division, an FSA group operating in the rural Latakia area, said helicopters had dropped six barrel bombs and fired dozens of rockets in the area on Sunday, but that the Al-Nusra Front had no presence in the area targeted by government forces.

Meanwhile, a senior US official called on all participants to give peace a chance, Agence France-Presse reported.

"Setbacks are inevitable," the unnamed official said. "Even under the best of circumstances, we don't expect the violence to end immediately. In fact, we are certain that there will continue to be fighting, in part because of organizations like 'IS' and Al Nusra."

"But it is in all of our interests, and especially the interests of the Syrian people, to give this process a chance. This is a real opportunity to reduce the violence the Syrian people have endured for far too long."