Syria: US claims it has proof Assad regime behind Douma chemical attack

The State Department has said it has evidence the Syrian regime was behind last week's chemical weapons attack on Douma. As Trump weighs his next move, the US has started moving ships to within striking range of Syria. 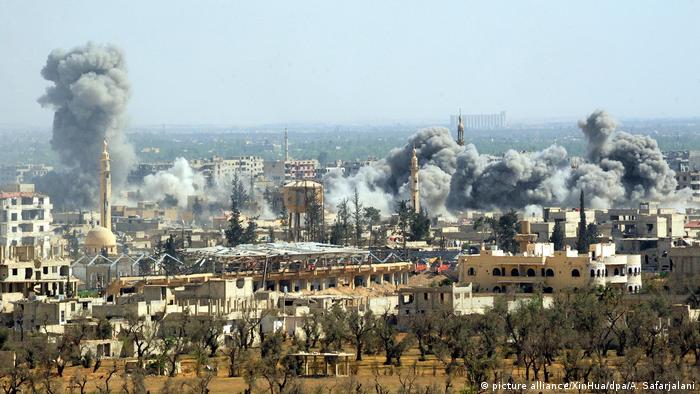 The US State Department and several officials in Washington said on Friday that they had proof Syrian President Bashar al-Assad's forces were behind last week's deadly chemical attack on Douma.

The US government's assertions come as it, along with the UK and France, continues to mull the scope and timing of a military attack on Syria, raising fears of a potential confrontation with Assad's key military backer, Russia.

What is Trump's Syria strategy?

'Russia part of the problem'

Maas: 'We will keep up the political pressure on Russia'

Risking escalation with Russia: US media on Friday reported that Trump and his advisers were at odds over the scope of a retaliatory strike on Syria. While the president has reportedly been pushing for a more sweeping offensive that would also punish Russia and Iran, Defense Secretary Jim Mattis warned anything more than a "show strike" would risk triggering a broader conflict in the region.

Assad continues to crush rebel forces: Last week's chemical attack on Douma ultimately led to Assad reclaiming what was once a center of the rebel insurgency on the outskirts of Damascus. With the support of Iranian-backed fighters and Russian air support, the Syrian regime's position in the country's seven-year civil war had appeared increasingly unassailable.

Western powers building up: However, television images of young Syrian children struggling to breath prompted international condemnation and pledges from the US, UK and France to retaliate against those responsible. Alongside the USS Donald Cook, the British Royal Navy and a French frigate have also moved into the eastern Mediterranean and within striking of Syria.

Talks between Russia and West ongoing: Amid the rising tensions, Russian President Vladimir Putin and his French counterpart, Emmanuel Macron, spoke on Friday, according to the Kremlin. The two leaders agreed to coordinate future actions related to the crisis, with the aim of avoiding any potential military conflict. "The most important thing is to refrain from ill-considered and dangerous actions that would constitute a gross violation of the UN Charter and would have unpredictable consequences," the Kremlin said in a statement.