A ceasefire is reported to be holding in three Syrian provinces with no air strikes or clashes reported. The United States, Russia and Jordan reached the 'de-escalation agreement.' 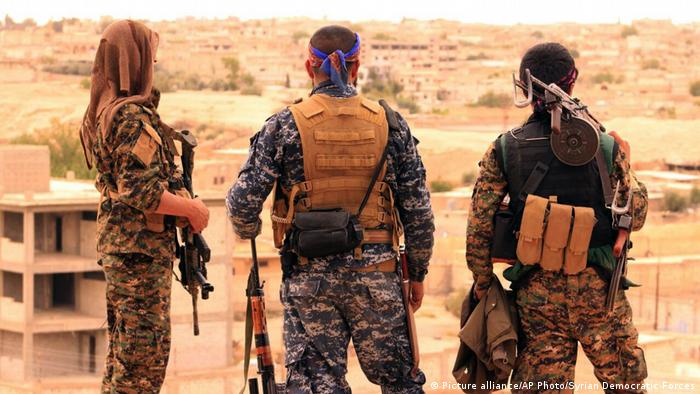 As Trump and Putin meet, US and Russia agree ceasefire for southwest Syria

On the sidelines of the G20 summit, the United States and Russia have agreed to a ceasefire for parts of Syria. Jordan has confirmed that it is party to the accord, which is scheduled to begin at the weekend. (07.07.2017)

Syrian UN Envoy de Mistura has announced the Geneva meeting between the long-battling government and rebel groups. Despite six years of entrenched conflict, one NGO provides hope for deaf Syrians. (09.03.2017)

The partial truce, which started Sunday, covers the Syrian provinces of Daraa, Sweida and Quneitra in the southwest. The break in fighting is linked to the "de-escalation deal" endorsed by the American and the Russian president two days earlier at the G20 summit in Hamburg.

A local opposition activist in Daraa, near the Jordanian border, reported calm in the opening minutes of the truce. "There's still a lot of anxiety," said Ahmad al-Masalmeh.

The UK-based Syrian Human Rights Observatory also said "calm was prevailing" with no air strikes or clashes since the truce began at noon local time.

"The main fronts in the three provinces between regime forces and opposition factions have seen a cessation of hostilities and shelling since this morning, with the exception of a few scattered shells fired on Daraa city before noon," said Rami Abdel Rahman, director of the group, which is monitoring Syria's civil conflict via a network of activists on the ground.

Russia will deploy its military police to supervise the truce in the provinces alongside the Jordanian border, while also coordinating with the government in Amman and the US.

The US was "encouraged by the progress made to reach" the agreement on the open-ended truce, said Trump's national security adviser H. R. McMaster.

"The United States remains committed to defeating ISIS, helping to end the conflict in Syria, reducing suffering, and enabling people to return to their homes," he said, using an alternative abbreviation for the jihadist group "Islamic State" (IS). "This agreement is an important step toward these common goals."

Israel's Benjamin Netanyahu's also commented on the peace deal, saying his country would "welcome a genuine ceasefire" in southern Syria as long as it does not allow Iran to establish a permanent military presence at Israel's border.

While international leaders have hammered many similar deals in the past, none of them has managed to permanently stop the fighting in the Middle Eastern country. Syrian warring parties are set to meet for peace talks in Geneva on Monday for yet another effort to end the six-year-long civil war.

UN Deputy Special Envoy for Syria Ramzy Ezzeldin Ramzy praised the deal as a "step in the right direction" which would aid the diplomatic efforts.

"This development helps create the appropriate environment for the talks," he added, expressing hope that agreements would be reached for other parts of the country.

In his statement, McMaster said that the US president "discussed the agreement with many world leaders at the G20 Summit," including Turkey's President Recep Tayyip Erdogan, Britain's Prime Minister Theresa May and Germany's Chancellor Angela Merkel.

On the previous night, regime helicopters allegedly dropped barrel bombs packed with explosives on rebels in the southern city of Daraa, but no casualties were reported.