Syria: Russian pilot of downed jet 'killed himself' with grenade

A Russian pilot who was shot down in Syria has been posthumously honored after reportedly killing himself with a grenade. Russian warplanes have been ordered to fly higher as they intensify attacks in Idlib. 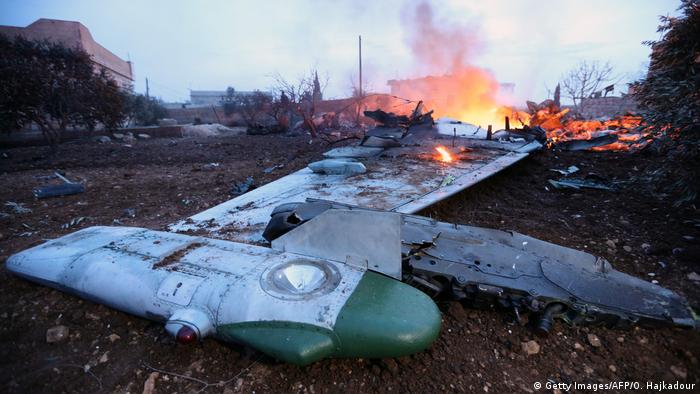 The Russian pilot who was shot down in Syria at the weekend committed suicide with a grenade before he could be captured by Syrian rebels, the Russian defense ministry said Monday.

Russian authorities have now lionized the pilot's death, seizing a propaganda victory from Syrian rebels who dramatically shot down the Sukhoi Su-25 jet involved in a major push into Idlib province.

A spokesman for al-Qaida-linked rebel group Hayat Tahrir al-Sham, said the downing was retaliation for Russia's bombing campaign. "This is for the criminal invaders to know that our skies are not a picnic for them and they cannot cross through without paying the price," Mahmoud Turkistani said in comments carried by the Ebaa news agency, an outlet seen as close to the rebel group.

Peskov also said: "It's extremely worrying that shoulder-launched surface-to air missiles are in the hands of the terrorists."

Why are Russian jets in Idlib? Idlib province is one of the last rebel-held bastions in the country. Syrian government forces, backed by Russian air support and Iranian arms, have intensified their offensive there in recent months and days. Rebel-held areas have been targeted in at least 50 airstrikes since early Saturday, according to an independent monitoring group, the Syrian Observatory for Human Rights.

Who are Hayat Tahrir al-Sham? Hayat Tahrir al-Sham (HTS) are a Salafist jihadi alliance led by the al-Qaida linked al-Nusra Front. In recent months they have ousted more moderate rebel groups from Idlib. Hundreds of thousands of people displaced by Syria's seven-year-old civil war are also living in Idlib.

How did HTS shoot the jet down? According to Russia, the plane was most likely hit in its right engine with a heat-seeking missile shot from a hand-held launcher, such as a Soviet-designed Strela or an American Stinger. The jet was probably flying close to the ground, and since the incident Russia has ordered its warplanes in Syria to fly higher.