Opposition fighters have surrendered government institutions and a strategic highway. The Syrian regime's latest offensives in Homs and Eastern Ghouta have dealt a fatal blow to the country's rebel movement. 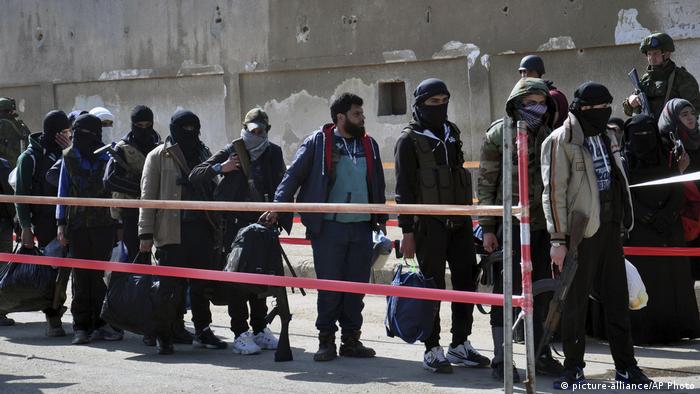 Rebels in three Syrians towns in the central province of Homs on Friday surrendered arms to regime forces as part of a withdrawal deal with Damascus.

The rebel-held towns of Talbiseh, Rastan and al-Houla have been evacuated under the agreement. Opposition fighters who wish to leave will be able to join civilians being transported to Jarablus, an opposition enclave in the Aleppo province, according to the Syrian government.

Read more: Syria: Expropriation is 'punishment for those who protested'

However, some rebels have refused to be party to the withdrawal deal. Instead, they shelled government positions on Thursday.

Under the deal, government institutions will be returned to Syrian authorities along with a strategic highway that connects the cities of Homs and Hama.

Over the past year, regime forces have made territorial gains with the help of Russia's military. Damascus has negotiated similar withdrawal deals following bloody campaigns that have cost hundreds of civilian and rebel lives.

Last week, Damascus negotiated a deal that saw rebel groups withdraw from Eastern Ghouta near the capital, considered one of the last opposition strongholds. Similar deals are underway in besieged Damascus suburbs, including the Beit Sahm, Babila and Yalda districts.

As the Syrian conflict winds down, Damascus is attempting to consolidate territory across the country in a bid to secure its interests in future peace talks. The government's latest offensives in Homs and Eastern Ghouta have dealt a fatal blow to the opposition movement.

More than 350,000 people have been killed and more than half Syria's population displaced since 2011, when government forces launched a brutal campaign against protesters calling for President Bashar Assad to step down.

Since then, the conflict has transformed into a multifront war drawing in global superpowers, regional players and nonstate actors.