Syria's army, backed by Russia, has bombed the eastern part of Aleppo, killing more than 150 people, rescue workers say. The attacks come shortly before the US and Russia peace talks this weekend. 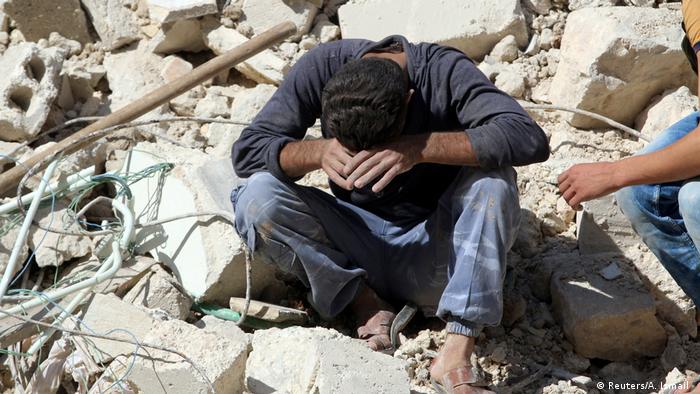 Airstrikes on rebel-held eastern Aleppo resumed on Thursday despite an announcement by the Syrian army that it would taper off strikes for humanitarian reasons.

"The bombing started at 2 a.m. and it's going on until now," Ibrahim Abu Laith, a civil defense and rescue official told the Reuters news agency.

The death toll this week according to rescue workers topped 154, although the figures could not be independently verified.

At least four children were killed and 10 wounded when rebel rockets landed near a school in government-controlled eastern Aleppo on Thursday, the Syrian Observatory for Human Rights said. According to Syria's official news agency SANA, the school, in Aleppo's al-Suleimaniya area, had been targeted in a terrorist attack. The observatory also said that rebels shelled government areas in eastern Aleppo, killing eight and wounding another 79 people.

Foreign Ministers of the European Union (EU) reacted to the airstrikes by Syria's Russia-backed military,saying that since the beginning of the offensive, the intensity and scale of aerial bombardment had been disproportionate, Reuters news agency reported.

Syria has been ravaged by war for nearly six years, with President Bashar Assad's forces backed by Russia and Iran engaged in a fight for domination with rebels, including groups affiliated with the so-called "Islamic State" (IS) and al-Qaeda fighters.

On Thursday, Damascus struck a deal with Moscow to import a million tons of wheat to cover basic needs for one year at low prices. Syria's government also partially approved an aid package to deliver help for Syria's besieged areas. However, Assad's officials have not given their permission to deliver vital supplies to eastern Aleppo and three districts near Damascus, the UN's deputy envoy to Syria, Ramzy Ezzeldin Ramzy told reporters, adding that the situation in the area was "dire."

Moscow also said it was willing to offer "safe passage" to rebels out of Aleppo. "We are ready to ensure the safe withdrawal of armed rebels, the unimpeded passage of civilians to and from eastern Aleppo as well as the delivery of aid there," Russian Lieutenant General Sergei Rudskoy said on television.

In an interview with Russian media "Komsomolskaya Pravda," Assad said his forces would retake the Aleppo as a springboard to liberate other parts of the country.

"It's going to be the springboard, as a big city, to move to other areas, to liberate other areas from the terrorists. This is the importance of Aleppo now," Assad said. "You have to keep cleaning this area and to push the terrorists to Turkey to go back to where they come from, or to kill them. There's no other option. But Aleppo is going to be a very important springboard to do this move," Assad said.

Meanwhile, US officials announced that President Barack Obama would meet senior policy advisors to consider military and other options in Syria. However, they said it was unlikely that Obama would order US airstrikes on Syrian government targets.

US Secretary of State John Kerry and Russian Foreign Minister Sergei Lavrov are alsodue to meet in Lausanne alongside diplomats from Turkey, Qatar and Saudi Arabia. The meeting comes as Turkey and Russia, each on opposing sides of the conflict, have undergone an rapproachment in recent weeks.

Washington will then meet with European allies in London on Sunday.

#AleppoIsBurning: Can a Twitter trend help end the Syrian war?