Both the US and UN have said they are investigating opposing claims by the Syrian government and rebels over the use of chemical weapons. UN Secretary Ban Ki-moon warned such behavior would be an 'outrageous crime.' 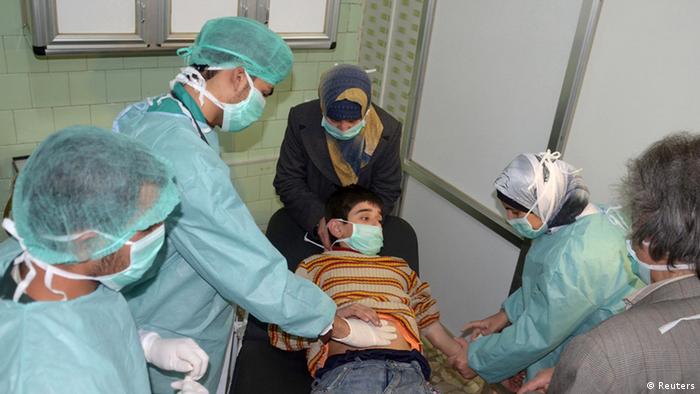 UN Secretary General Ban Ki-moon said he remained "convinced that the use of chemical weapons by any party under any circumstances would constitute an outrageous crime," the UN said late on Tuesday.

The government of President Bashar al-Assad in Damascus blamed rebels for the Tuesday attack, which they say killed 16 people and wounded 86. Rebels, for their part, claim the attack was carried out by the government, using Scud missiles.

Ban, along with Ahmet Uzumcu, Director General of the Organization for the Prohibition of Chemical Weapons, "shared deep concern about the alleged use of chemical weapons in Syria," a UN statement said.

Meanwhile, Washington rejected Damascus' claims late on Tuesday, claiming that the al-Assad regime was seeking to divert attention from its own record of war crimes.

While Russian Foreign Ministry said it had "information" that insurgents had indeed used chemical weapons, the US State Department said it would seek to verify the information with Moscow.

State Department spokeswoman Victoria Nuland said that Washington was looking "carefully at allegations made by the opposition" that the Syrian regime had been responsible for a chemical attack. "We will consult closely with our partners on this," Nuland said.

White House spokesman Jay Carney reiterated President Barack Obama's longstanding warning that the use of chemical weapons represented a "red line" that Damascus would be "held accountable" if it were crossed.

Information Minister Omran al-Zoabi had said the rebels had fired a rocket with chemical weapons at the town of Khan al-Assal, southwest of Aleppo, calling this a "dangerous escalation" and a bad "first act" by the opposition's new interim government. The Syrian opposition elected rival Prime Minister Ghassan Hitto early on Tuesday evening, to oversee an opposition for rebel-held areas.

Al-Zoabi accused Turkey and Qatar, which have supported the rebels, of having "legal, moral and political responsibility" for the strike.

"We were hearing reports from early this morning about a regime attack on Khan al-Assal, and we believe they fired a Scud with chemical agents," Qassim Saadeddine, a spokesman for the Higher Military Council in Aleppo, told Reuters news agency.

President al-Assad is widely believed to have chemical weapons such as VX nerve agents and sarin, which date back to the 1970s, but the regime has not acknowledged having the arms.

It is unclear if the Syrian government's alleged chemical weapons are mounted and ready to be launched on Scud missiles, if the chemical agents are maintained effectively and whether the regime is able to replenish its chemical stocks.

There have been no previous reports of chemical weapons in the hands of insurgents.