The animal was described by witnesses as a "4-meter great white" shark. Local government and police have announced the closure of beaches across Sydney's coast. 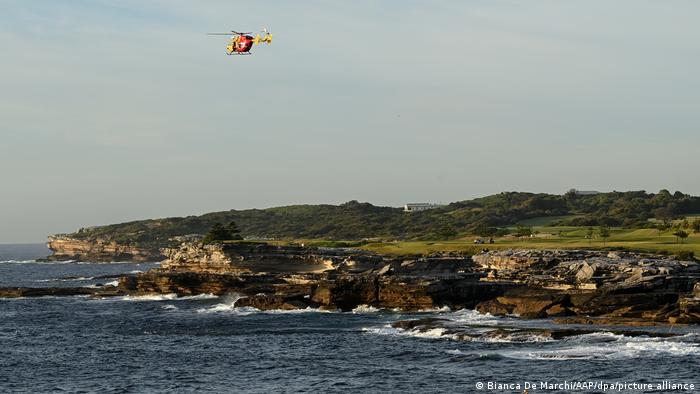 Police are scanning the coastline

Beaches in eastern Sydney were closed on Thursday following the death of a swimmer believed to have been attacked by a shark.

The suspected attack would be the first fatal shark attack in Sydney in some 60 years.

A police statement said that emergency services were called at 4:35 p.m. local time (0935 GMT) on Wednesday to Little Bay, a coastal suburb located around 15 kilometers southeast of Sydney's city center, in response to reports of a shark attack.

Police said that they and rescuers "attended and located human remains in the water."

Local government said in a Thursday tweet that Little Bay and a number of other southeastern beaches remained closed, "as lifeguards use drones and jet skis to check the area for any further shark sightings."

New South Wales police announced the closure of a number of Sydney beaches, including beaches further north and south such as Bondi Beach and Cronulla, and urged citizens not to "attempt to access the water" there.

According to 9News, witnesses said that the swimmer was "just meters from the rocks" along the coast before being attacked by the shark.

"The swimmer suffered catastrophic injuries and there was nothing paramedics could do," NSW Ambulance inspector Lucky Phrachnanh was cited as saying by Australia's AAP news agency on Thursday.

According to researchers with the International Shark Attack File database, Australia saw three unprovoked shark-related deaths across the country last year, more than any other nation in the world.

New Caledonia came second with two attacks, and the United States, Brazil and South Africa each had a single unprovoked fatal shark attack. There were a total of 11 attacks in 2021, according to the database.

The man succumbed to his injuries despite the best efforts of emergency services off the coast of New South Wales.