Meat in Switzerland is pricey, but does everyone benefit? | Business| Economy and finance news from a German perspective | DW | 13.08.2020

In Switzerland, meat costs more than anywhere else. Yet, this alone doesn't ensure animal welfare or fair conditions for farmers and workers. Yet there are reasons why the country's meat industry could set an example. 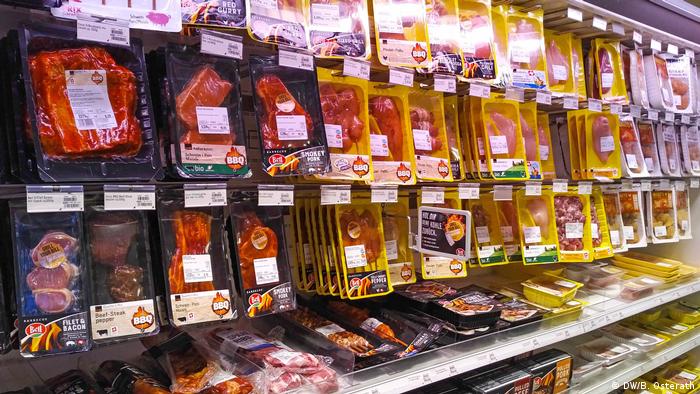 When organizing a BBQ in Switzerland, a newcomer to the country might easily get a shock in front of the supermarket shelf.

Meat is incredibly expensive here — especially when you compare it with prices in Germany. For example, you will have to pay at least 12 Swiss francs (€11, $13) for two simple barbecue skewers weighing 150 gram each.

Adding all costs together, you might change your mind and switch to barbecuing potatoes and vegetables instead.

In fact, meat in Switzerland costs almost one and a half times as much as the global average. It's more expensive than anywhere else in the world, according to a study by Caterwings, an online marketplace for catering that has since gone bankrupt.

Compared to the EU average, the Swiss have to pay 2.3 times as much for meat, according to data from the European Statistical Office Eurostat.

That's not only because everything is more expensive in Switzerland. Food in general costs "only" 1.6 times as much as EU average. When it comes to meat, the Swiss consumer has to pay extra indeed.

The Swiss Animal Welfare Act is considered the strictest in the world. One might suspect that the high meat prices in Switzerland are a result of that — in other words, that more animal-friendly husbandry drives up production costs and that farmers and livestock ultimately benefit.

But that's not the case, says Mathias Binswanger, Professor of Economics at the University of Applied Sciences and Arts Northwestern Switzerland in Olten. "The higher price primarily benefits the retailers, not the farmers."

The high margin for wholesalers and retailers increases still further if the meat is produced in animal-friendly conditions, according to a market analysis by the Swiss animal welfare organization STS.

A random sample from this summer shows a kilogram of ham from conventional animal husbandry cost an average of 23 francs (21 euros), whereas a kilogram of organic ham cost 51 francs (47 euros) — more than twice as much. 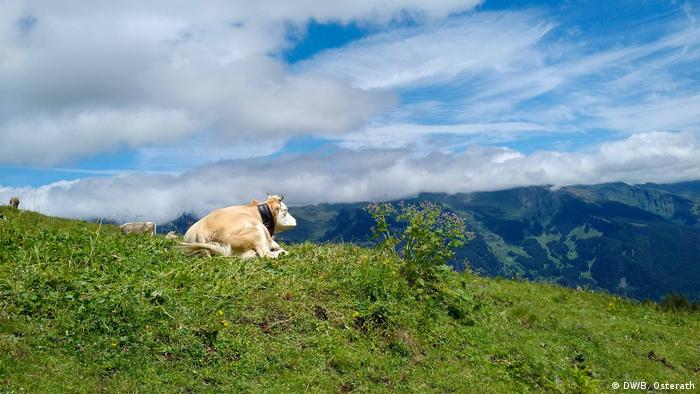 The good life: Not all cows in Switzerland can live like this

According to calculations by the animal welfare activists, the farmer receives just two francs of the 28-franc difference; the slaughterhouse gets three francs and the retailers 23 francs.

No wonder that sales in these meat categories are stagnating or even falling, they say.

High meat prices alone do not seem to make for happy cows and pigs.

Closing off the world market

They do have higher production costs, though, says Martin Rufer, director at the Swiss Farmers' Association. Overall, Swiss farmers are nevertheless in "a good situation."

The system only works because Switzerland is a member of the European Free Trade Association (EFTA), but not part of the European Economic Area. It can therefore easily isolate itself from the EU internal market and protect domestic products from foreign competition.

Anyone entering Switzerland may import a maximum of 1 kilogram of meat or meat products per person. Anything above that will get extremely expensive because of the high customs duties.

The fact that Switzerland is not a member of the EU is also good for the farm animals, says economist Mathias Binswanger.

"The country can pursue its own agricultural policy. Direct democracy also allows the people to have more influence. This has a positive effect on animal welfare."

Of course, Switzerland is no idyll either, he adds — but it's simply more difficult to make laws against the people's will.

Swiss law stipulates the maximum number of calves, chickens or pigs a farm may keep.

This way, farms in Switzerland are deliberately kept relatively small — which benefits the animals.

On average, a Swiss farm covers an area of 20 hectares; in Germany, it is over 60 hectares.

The concept of small farms is successful for one reason in particular — Switzerland itself produces only 80% of the meat it consumes; 20% is imported.

Germany and many other European countries, including the Netherlands, on the other hand, produce meat in surplus for export.

'20 years ahead in animal welfare'

Whether it is due to direct democracy, isolation from the world market or the country's small size — in any case, animal welfare in Switzerland is taken more seriously than in neighboring countries.

"The discussions that are now being held in Germany were held here years or even decades ago," says Cesare Sciarra, Managing Director of the Competence Center for Farm Animals at the Swiss Animal Welfare STS.

In Switzerland, for example, the castration of piglets without anaesthesia has been banned since 2010, and keeping laying hens in battery cages is prohibited since 1992.

"Switzerland is a good 20 years ahead of other countries in animal welfare," says Cesare Sciarra. "Things aren't perfect here either, but the discussion simply started earlier." According to Cesare Sciarra, the fact that farm animals are better off in Switzerland compared with many other countries is only partly due to laws, though.

A big contribution has been made by the big Swiss supermarket chains Migros and Coop, as they established their own animal welfare labels over 20 years ago. They have their own guidelines in terms of animal welfare and environmental protection.

"Some label programs even have more animal-friendly guidelines than the programs for producing organic meat," Sciarra praises.

Despite everything, the Swiss animal welfare organization STS criticizes the fact that only just under a third of the animals live in production systems that animal welfare activists can recommend. For chicken, it's a modest 8%.

According to Cesare Sciarra, much improvement is still needed, for example in the cattle-fattening industry.

Moreover, one-fifth of all meat sold in Switzerland is imported and produced outside Switzerland, i.e. in less animal-friendly husbandry systems.

Restaurants and caterers in particular resort to this cheap non-Swiss meat in order to save costs.

"In Switzerland, the meat-processing industry isn't a model industry either."

Many employees work for wages without a general minimum wage, Zimmermann says, adding that "depending on the Swiss region, they don't earn enough money to live on."

If there is one thing, though, one can learn from the Swiss it's this: They are aware that good food comes at a price.

"Cheap meat, like the kind you find in many supermarkets in Germany, is virtually impossible to sell in Switzerland," says Tilman Slembeck, a consumer economist at the Zurich University of Applied Sciences (ZHAW) in Winterthur.

"When the Swiss see meat that cheap they automatically think: 'This can't be good!'"