Seven caving tourists trapped by floodwaters for five extra nights in Switzerland have emerged safely. They had sheltered in a bivouac in Hoelloch, the world's eighth-largest underground system, with their guide. 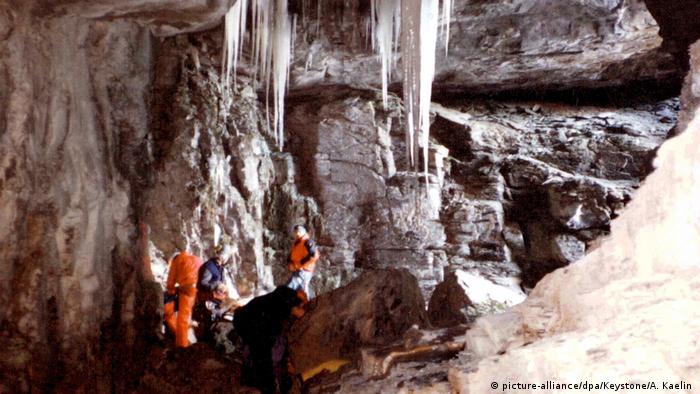 On Friday, police in central Switzerland said seven tourists had passed medical checks after emerging overnight from an unplanned underground stay that lasted almost a week.

The normally two-day guided underground adventure began last Saturday but was extended twice by inrushes of water that blocked the usual exit, a so-called siphon.

On Thursday night, the water level dropped faster than expected and the men, aged between 25 and 55, had negotiated that segment to emerge several hours later and take warm showers, said rescue operation head Regula Höhn, of Speleo-Secour, a Switzerland-wide rescue organization. Flooding kept the spelunkers in the cave days longer than expected

"After a week without showering, that was a welcome change for the men," Höhn told a news conference.

Since Sunday, professional cavers had managed to deliver extra rations, as well as letters from family, books and batteries, via an alternative chute regarded as too dangerous for inexperienced visitors.

The bivouac, in a roomy grotto 300 meters (1,000 feet) underground, is fitted out like an alpine hut, with the temperature constant at 6 degrees Celsius (43 F).

It has lighting, toilets and a kitchen table and is stocked with foodstuffs, including spaghetti and even cheese fondue, as part of the caving adventure attraction.

Peter Draganits, a director of Trekking Outdoors, which ran the trip, had told the German news agency DPA on Wednesday: "No-one is injured; the mood is good."

"Yesterday, one of them had his birthday," he said. "There was chocolate pudding as dessert."

Without synchronizing daylight, it was important to pass the time underground in a structured way, Draganits said.

While they waited, the trapped tourists made short outings to an underground waterfall and dripstone caverns and fashioned a model castle out of clay, he said, adding that, otherwise, the recipe was: "Chat a lot and drink tea."

Stefan Nussbaumer, another Speleo-Secour rescuer, praised the adventure tourists' behavior: "It was a very stable group."

"They stuck together well. They took care of one another. As a result, it was somewhat easier for us to assist them while we were inside," Nussbaumer said.

Explorers first entered the Hoellloch, accessed via the Muotathal Valley, in 1875, and by 2014 mapping of the landscape's network had been extended to 200 kilometers (120 miles) in length.

That makes it Europe's second-longest underground labyrinth and the eighth-longest in the world, according to Swiss SRF television.

Dozens of caving specialists are trying to rescue an injured man trapped in Germany’s Riesending cave system. The man, who can only be moved lying down, has been located roughly 1,000 meters below the surface. (09.06.2014)