There’s sugar in almost everything we eat. We need sugar for energy. But too much is bad for our health. So are artificial sweeteners the answer? Well, they can come with risks too - and a bad aftertaste. 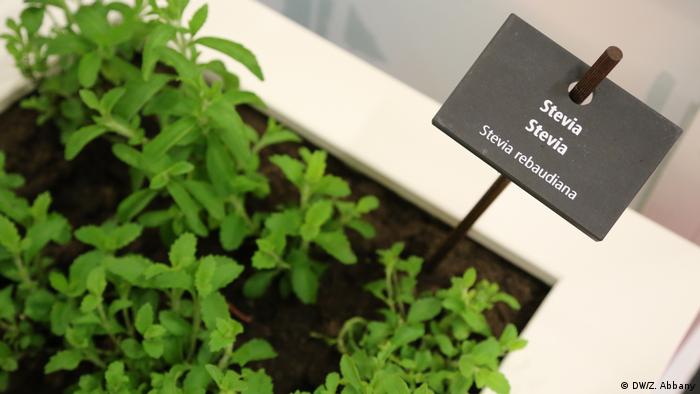 Going in search of people who will speak on the record about artificial sweeteners like Aspartame at a sweets fair is like going to a tobacco convention to talk about cancer. Everyone can see the elephant in the room but no one wants to chew on it. And there's a palpable sense of anxiety. No one wants to say the wrong thing.

I spent a day at Cologne's international sweets fair (ISM 2017) on Tuesday, and I can confirm that watching the sweets industry side-step questions about artificial sweeteners is as cringe-worthy as witnessing the birth of a new dance. That's true even for those companies that don't use artificial sweeteners.

Off the record they'll happily tell about the nasty aftertaste of artificial sweeteners, that you have to mask it, adding chemicals upon chemicals. Or they'll tell you about Aspartame's former use as a deadly neurotoxin (a nerve agent in warfare). Oh and did you hear the one about the study that showed possible links between sweeteners and cancer? Yeah, well, that was back in the 1970s, and it was only found in lab rats, so how reliable is that anyway?

Other than that, the line is: We don't talk about stuff we don't do. We're all natural.

And I did indeed come across two companies who profess to add no extra sugar. One was Natural Foods, who rely on sugars already in fruits like dates. 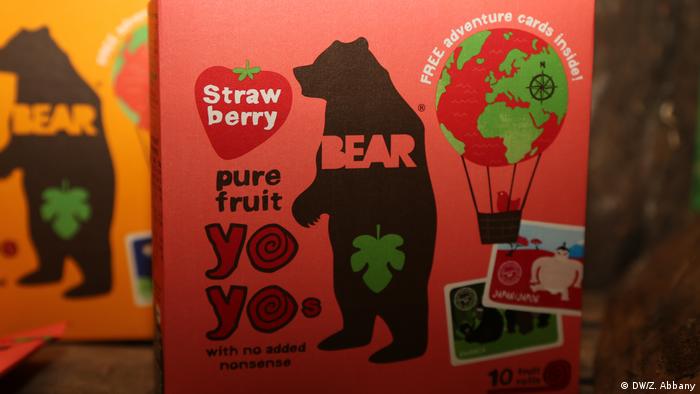 Natural Foods with "no added nonsense." That's no extra natural sugar or artificial sweeteners to you and me

"It's okay to get a bit of sugar on a daily basis, but there is so much added sugar, so we don't add anything else," said Joost Warbout of Natural Foods. "There's a little bit [of sugar] from the fruit but that's it."

It's a simple concept. If you pick up one of their fruit bars, the ingredients will read 51 percent cashews and 49 percent dates. Equals 100 percent. So it is possible.

Then there's Germany's old, establishment baker, Brandt. They also have a sugar-free product, but some sugar arises naturally through the baking process. 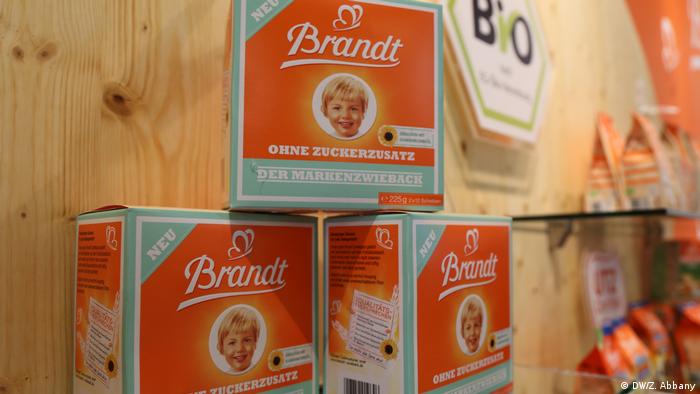 The thing is, sugar-free for Brandt means "not sweet."

Shtum unless it's Stevia

But we do still like to eat sweet things. And why not? Live a little. Some will even say our desire for sweet tastes is genetic. Zucceroo makes decorative sugar products for things like cakes. They only use real sugar.

"The original sugar from sugar beet, or cane sugar, is what we all know and love. I'd say that is genetic," said Zucceroo's Peter Forsch. "Technical sugars like Stevia and Isomalt may have a place in drinks, but we don't love them in food." 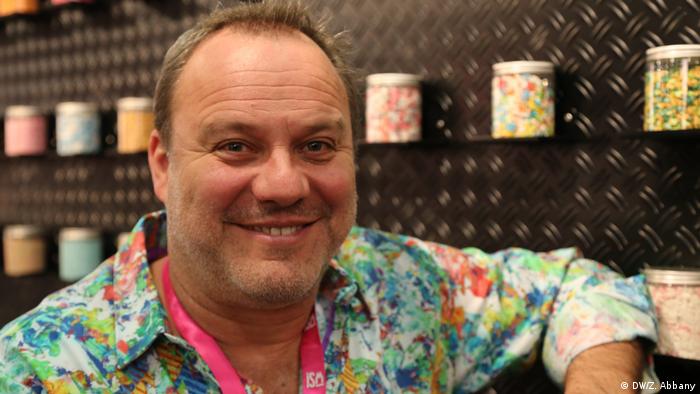 Stevia is the only artificial sweetener manufacturers seem comfortable talking about. Perhaps that's because it's plant-based, and it's kind of a trendy super-additive at the moment. It's a low-calorie sweetener and grows like herbs. Just ask the Swiss cough sweet-maker, Ricola.

"We use Stevia because it's a natural alternative that fits well together with bee balm. Stevia tends to have a taste on its own, so it doesn't go with every product," said Ricola's Lukas Eiselin. "But we use Stevia to be as natural as possible."

The Coca-Cola company has apparently found Stevia's natural taste an issue. The soda giant had to remodel its "Coke Zero" recipe a few times. I chewed on a Stevia leave at the ISM and it tastes a bit herby, minty and sweet.

"We use alternative sugars because of the calories in natural sugar and the risk of diabetes, but also because sugar is bad for your teeth," said Eiselin.

But artificial sweeteners have their own bad side-effects.

"Stevia is not much different from an artificial sweetener in my opinion," said Ulf Herrmann of Frusano. "It has a bitter aftertaste and I simply don't like it."

Frusano makes sweets suitable for people with a fructose intolerance, a dangerous condition. They use glucose syrup. 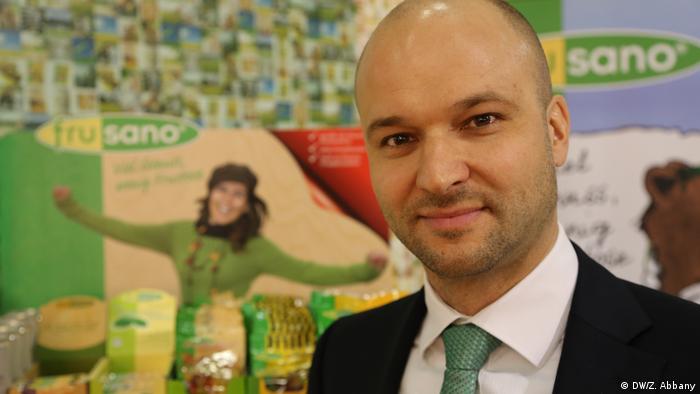 Frusano's Ulf Herrmann: Sugar alternatives are not always about lower calories, but countering a fructose intolerance

"Most producers who use artificial sweeteners use a mixture. Even if you use Stevia, usually there are also sugar alcohols like Sorbitol to mask the taste and make the sweetness round," Herrmann said. "It's almost the opposite of clean labeling. You add more and more ingredients to mask the side-effects of the one, and then another to mask that.”

Labeling is clearly an issue with sweeteners and more so, the extent to which we, the consumers, understand or even read it. For instance, did you know that some artificial sweeteners have a laxative effect? They can cause bloating and intestinal gas.

"There's a new EU law that says you have to write that on packaging," said Herrmann. "The wording is something like 'If consumed in large quantities, may cause diarrhea.' But it always does [if you consume a lot]!" 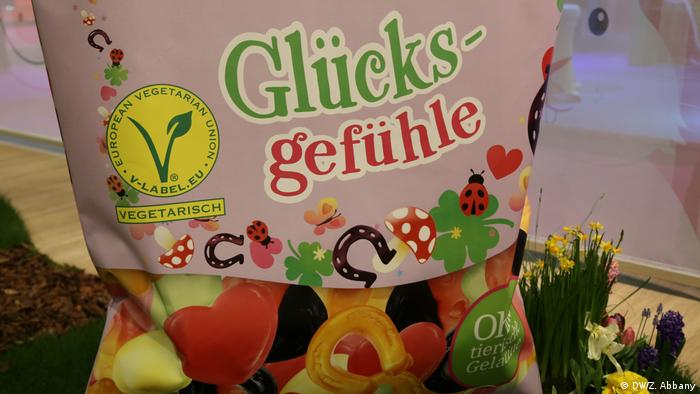 One of my next stops at the ISM was Dallmann's, a German company best known for its sage cough sweets. I asked what they used in their "sugar-free" product: real sugar or sweeteners? Ricola, I said, uses Stevia now. The dapper Dallmann's salesman, Herr Lippmann, in his fake apothecary lab coat, looked confused. Then he told me Dallmann's uses a mixture of Sucralose and Isomalt. But he seemed distracted, and mainly concerned with pointing me back to his competitor Ricola, whose website showed "they also use Aspartame."

Aspartame, like many other types of artificial sweeteners, is hundreds of times more potent than natural sugar. So you should always check the label on "sugar-free" products and if you're unsure what the E-numbers - like "E 954" (Saccharin) or "E 951" (Aspartame) - denote, dig deeper online. Also check recommendations for "Acceptable Daily Intake" (ADI).

On my way out of the ISM I headed back to the Ricola stand to ask them about Aspartame. Eiselin had left, so I had the pleasure of meeting the company's young head Felix Richterich. Only as soon as I mentioned Aspartame, he no longer wanted to talk and insisted I contact Eiselin. I have yet to hear back.

This article was originally published on February 1, 2017. At the time of publication, Ricola had yet to reply to our request for comment on its use of Aspartame. Since then we have received an email from Lukas Eiselin. Here is an unedited, relevant part of his response:

"When Ricola launched the first sugar free herb drops in the 80ies [sic] aspartame was the state-of-the-art sweetener for tooth-friendly and low-calorie sweets. Although certain studies do raise questions to its safety, independent organizations such as the Joint FAO/WHO Expert Committee on Food Additives (JECFA) as well as the European Food Safety Authority (EFSA) have tested the safety of aspartame and confirm that it is safe for consumption."

These additional paragraphs were added to this article on February 3, 2017.

Sugar-free products stop us getting slimmer

Many people believe that synthetic sweeteners will help them lose weight. But it turns out that one common substitute for sugar actually blocks the function of an enzyme that is essential for preventing obesity. (24.11.2016)

Everyone knows diabetes. Those who suffer from it have to inject themselves with insulin every day and have strict dietary restrictions - right? Not quite. Time to clear up some prejudices with DW's fact check. (07.04.2016)