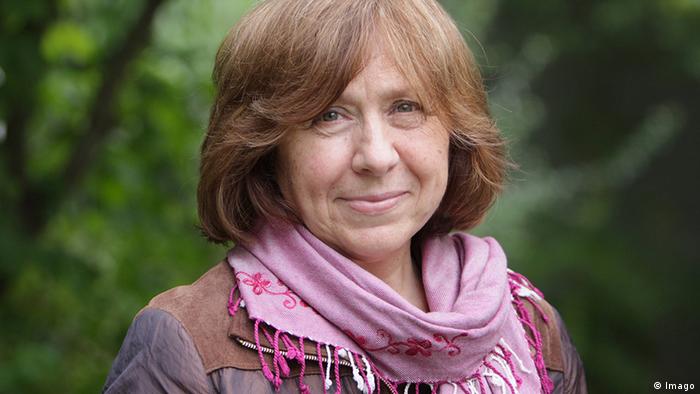 The Board of Trustees of the Peace Prize of the German Publishers and Booksellers Association has awarded its 2013 peace prize to Belarusian journalist and author Svetlana Alexievich.

The board on Thursday praised the investigative journalist, saying she "has consistently and effectively traced the lives and experiences of her fellow citizens in Belarus, Russia and the Ukraine by articulating their passions and sorrows in a humble and generous manner."

Alexievich used detailed witness interviews and other research material to write on historical topics from the Second World War right through to Belarus under President Alexander Lukashenko.

"Her tragic chronicles of the individual human fates involved in the Chernobyl disaster, the Soviet war in Afghanistan and the unfulfilled longing for peace after the crumbling of the Soviet Empire give tangible expression to a fundamental undercurrent of existential disappointment that is difficult to disregard," the association's statement said.

Born in 1948, Alexievich studied journalism, worked at a local newspaper, and then became a correspondent for the literary magazine "Neman."

Having experimented with several prosaic styles, she ultimately settled on a trademark method of her own: compiling a chorus of individual voices and interviews to create something approaching a written collage of contemporary experience and opinion.

The German Publishers and Booksellers Association said Alexievich had "created her own aesthetic literary genre, often referred to as the 'novel of voices'."

Her first book in this style, called "War's Unwomanly Face" in English, explored the fates of female Soviet soldiers in the Second World War. Completed in 1983, it only won Soviet censors' approval with the advent of Perestroika in 1985.

She wrote another book based on hundreds of interviews with Soviet soldiers from the Afghan war, and one based on people affected by the nuclear meltdown at Chernobyl in Ukraine.

Having left the country for several years amid an uneasy relationship to the government of Alexander Lukashenko, Alexievich moved back to Belarus' capital Minsk in 2011.

She is scheduled to receive her prize on October 13.