Huge ski resorts, hotel complexes and noisy après-ski parties are the norm in many Alpine areas. Not in Berchtesgadener Land. The rural region missed out on many touristic developments. Now it's reaping the benefits. 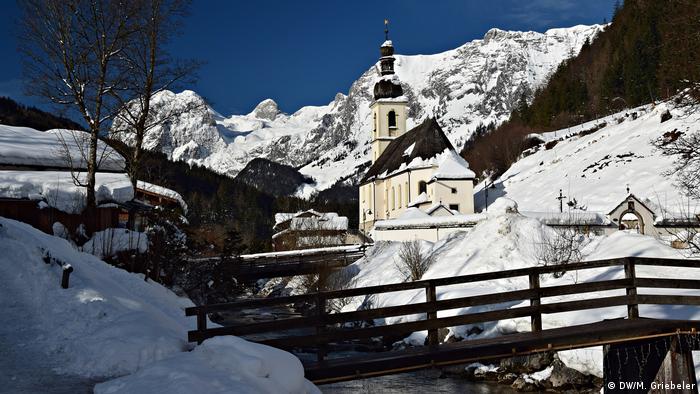 Only the light rushing of the Wimbach River, birdsong and horse hooves in the snow can be heard. The mountains of the Alps rise majestically  around the small village of Ramsau at the south-easternmost tip of Bavaria. "Beeeetziiiiii Beeeeetziii Beeeeetz, kimm, kimm!" rings out through the valley – and just under 40 sheep push to the fence surrounding their enclosure, towards Renate Aschauer.

Without her, these animals would no longer be here. The Alpine stone sheep was almost extinct. Now Aschauer's flock grazes again in Ramsau's mountain meadows in the summer, watched only by her three sheepdogs, almost the way it was centuries ago – an Alpine idyll right out of a picture book. 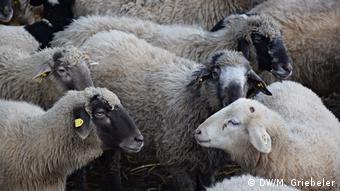 The Alpine Stone Sheep is dangered in population

A chairlift to deceleration

In reality, that idyll has become rare. Ski slopes as wide as highways with artificial snow, huge lift complexes and après-ski chalets turn many villages in the Alps into hellish holiday hot spots with tens of thousands of visitors a year.

Decades ago, Ramsau also wanted a cable car up Mount Watzmann, Germany's most distinctive peak. But in the late 1970s, with the establishment of the national park, the plans were shelved for good. "That's fortunate," says Fritz Rasp, head of tourist information in Ramsau, "because this keeps us so much closer to nature, and for us that's the name of the game." 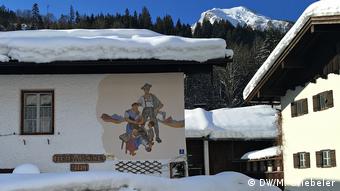 About 1,800 people live in Ramsau, tourism is one of its main sources of revenue

Instead of large concrete tourist developments, there are mainly small hotels and guesthouses here. Instead of installing sinfully expensive snow cannons, the locals prefer to breed rare sheep. Instead of taking sixteen-passenger gondolas, guests can get right out of bed and ski the cross-country trails. Ramsau has the highest concentration of alpine guides in Germany, and as tourism director, Fritz Rasp has a hard time including all the tours in the brochures for visitors.

In contrast, the downhill ski area at Hochschwarzeck is tiny, and according to Rasp, the chair lift runs "so slowly that our fastest mountaineers are at the summit before the lift arrives."

Without snow the lift shuts down. That's intentional. 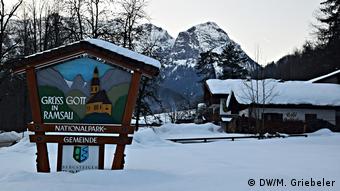 In 2015 Ramsau was designated a mountaineering village, the first in Germany. This initiative by the Austrian Alpine Association links villages that want to promote tourism in harmony with nature and preserve traditions. Rasp says that, for Ramsau, the title is not a marketing label. "Instead it confirms what we have been doing for almost thirty years: bringing people and nature together."

But that also means no artificial snow, so especially during warm winters, it's hardly worth running the ski lifts at Hochschwarzeck. Despite that, the mini-ski resort won't be using snow-making machines, but instead promoting its use of natural snow – as the residents of Ramsau have decided.

And their concept is evidently paying off: overall, the average stay in the Alps lasts under three days. Over the course of a year, many hotels aren't even booked at half capacity. In contrast, in Ramsau, as in the entire Berchtesgadener Land district, visitors recently stayed on average more than four nights. Hotels such as the Rehlegg achieve 75 percent capacity over the whole year. 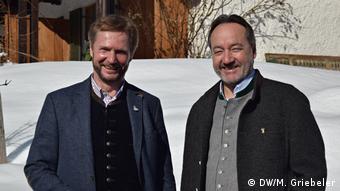 Two people who want to contribute to keeping the mountains as they are: Fritz Rasp (left) and Hannes Lichtmanegger

Six years ago, its director Hannes Lichtmannegger shifted gears and began to run his hotel on sustainable lines – from cleaning products and the electricity supply, to using regional products. Lamb used to come from New Zealand. Now he covers his entire yearly requirements with lamb from breeders like Renate Aschauer: "That's a transport distance of two kilometers instead of 20,000, and the quality is unequaled worldwide."

More than a spa

And those guests make the most of nature. On this winter's day, the car park at the Hochschwarzeck lift is full, but the queue for the lift is short. A young man and his girlfriend have come to the region for a spa holiday. "But a week of sauna sessions is pretty monotonous – here you can take a walk or go sledding from time to time," he tells us.

A father from Denmark pushes his small daughter towards the woods in her buggy. He says, "There's something for all ages and it's good value for money. It's great for family holidays." 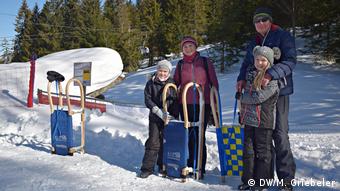 The Ramsau concept benefits from the fact that the entire region has dedicated itself to sustainable tourism. For more than 100 years, electric boats have plied the waters of Lake Konigssee. The Berchtesgadener Land district is a biosphere reserve. Tradition and craftsmanship are a writ large – in Franz Stangassinger's shop, for instance.

He makes the traditional Bavarian leather breeches known as lederhosen, just as his father and grandfather did. The waiting time for a tailor-made pair is just under a year and a half. Nevertheless, Stangassinger has no intention of expanding his business. "We've been the same size for 130 years and that was always enough. This idea of constant growth and expansion has no future for me," he says. "I think there has to be a time when you say, 'That will do.'" 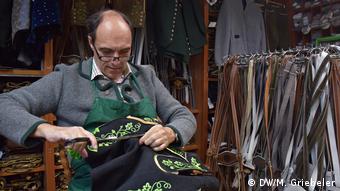 In early March, experts from around the world will be able to see the Berchtesgaden approach for themselves, at a UN mountain tourism conference . "It will be a good calling card for us," says Brigitte Schlögel, head of Berchtesgadener Land Tourismus GmbH. "We live close to nature here. I don't know any Berchtesgadener who doesn't go downhill or cross-country skiing, hiking, mountain climbing or mountain biking. They live this sustainability."

The limits of sustainability

Despite that, the region isn't immune to mass tourism: in the summer, thousands of day-trippers come from Munich, Austria, the US and Asia – because of the mountains and the world-famous Königssee. Traffic jams, illegal parking and long queues are the result. 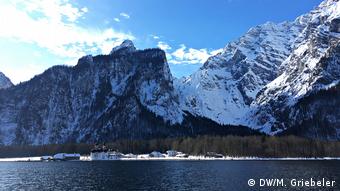 In the winter, boats travel over Lake Königssee to St. Bartholomew's Church only hourly – in the summer, every ten minutes

In consequence, Ramsau has already increased its parking fees. Vacationers travel free of charge on Berchtesgadener Land's public transportation system with what's called a 'guest card.' But Fritz Rasp says there's still a lot to do. It's often impossible to dispense with cars completely.

The world tourism organization's experts will also be touring the rural district: going to the documentation center in Obersalzberg, the old salt works in Bad Reichenhall, up Mount Jenner and to Lake Königssee. Of course, one tour leads to the mountaineering village of Ramsau. The Rehlegg will be serving a buffet with local specialties – including lamb from Alpine stone sheep.

Bavaria captivates tourists with its rustic traditions, royal palaces, and, of course, the Alps. (20.02.2019)

The Berchtesgaden National Park in Bavaria was founded on August 1, 1978 and attracts 1.5 million visitors a year. Its landmark is the 2713 meter high Watzmann mountain, at the foot of which the Königssee sparkles. (27.07.2018)

Overtourism: where will it take us?

At the ITB travel trade show in Berlin "overtourism" is hotly debated. Majorca, Venice and Berlin — they all suffer from the excesses of tourism, even though tourists are an important economic factor. (07.03.2018)