Suspended sentence for Bavarian mom who took daughters to Syria

A German court has handed a suspended sentence to a Bavarian woman who took her two children to Syria. She had been accused of helping terrorists, but this was thrown out. 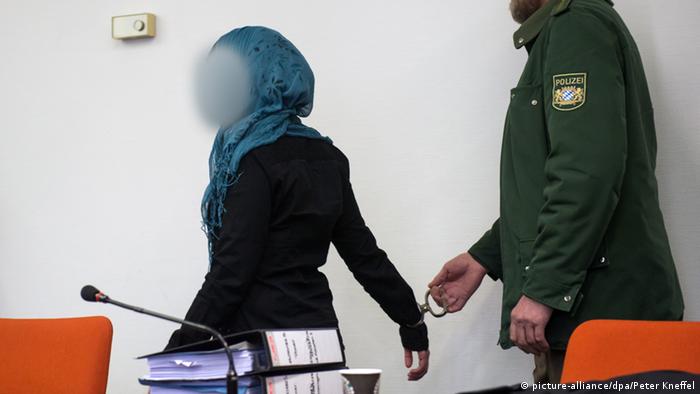 The woman, known as Andrea B., was handed a suspended prison sentence of 18 months in a Munich court on Wednesday.

Prosecutors had charged the 30-year-old of involvement in a serious act of violence jeopardizing the state - specifically by traveling with her two young daughters to the Syrian war zone in early 2014, making contact with the extremist Nusra Front group, and helping it to prepare attacks on Syria's armed forces.

Ultimately the regional court found the prosecutor's indictment did not stand, with its conviction and sentence relating only to the woman abducting her children - aged three and seven - as taking them to Syria meant their father's visitation rights could not be exercised.

Officials began investigating the case after the children's father filed a complaint last year. Andrea B. was arrested in Frankfurt in May 2014 on her return to Germany.

The woman's lawyers had argued that she traveled to Syria for humanitarian purposes. "I just felt I had to help, as there'd been three years of civil war and no-one had done so," she said, telling the court her faith compelled her to act, and that she "could not stand" seeing pictures of dead children caught up in the fighting.

Andrea B. was a Catholic from Bavaria's Allgäu region who converted to Islam in 2012. She then met a German woman online married to a militant of the Nusra Front, al Qaeda's affiliate in Syria. The man took her as his second wife.

The woman gave her account of her assistance in Syria, telling the court she redistributed relief supplies - medical material, moist wipes, baby formula and winter boots - acquired by her husband.

She said she decided to leave Syria when a family with which she was acquainted was murdered.

"I just didn't know any more how long my children and I would be safe," she told the court.

In delivering the verdict, the presiding judge told Andrea B. she should not have endangered the life of her children.

"What you want for your life - if you want to die as a martyr - this is your story. The life of your children is not for you to compromise."

Editor's note: Deutsche Welle follows the German press code, which stresses the importance of protecting the privacy of suspected criminals or victims and requires us to refrain from revealing full names in such cases.