With a swipe at U.S. President Bush and his "imperial program," the American novelist, playwright and critic accepted the prestigious peace prize from the German booksellers’ association on Sunday. 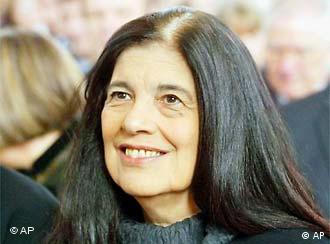 "In a world of false images and distorted truths, she defends the honor of free thought."

One of America’s foremost writers and intellectuals was bestowed with Germany’s highest literary honor at the Frankfurt Book Fair on Sunday. The German Booksellers’ Association, which hands out the annual Peace Prize, hailed Susan Sontag for her "exceptional sense of morality and immorality."

She is no diplomat, the association’s director Dieter Schormann said in his address at Frankfurt's Paulskirche, adding that Sontag sees her first duty in speaking the truth. "In a world of false images and distorted truths, she defends the honor of free thought."

Sontag’s outspoken opposition to the U.S.-led war in Iraq and its response to the September 11 terrorist attacks has frequently led to sharp criticism in her home country. But the 70 year-old, whose novels, essays and short stories have been translated into more than 30 languages, is generally seen in Germany as the American intellectual par excellence, the public conscience of an arrogant superpower.

In her acceptance speech, Sontag held true to her reputation. She seized the opportunity to criticize President George W. Bush’s administration. She drew attention to the "deliberate absence" from the ceremony of the U.S. ambassador to Germany as typical of Washington’s current ideology of distancing itself from "old Europe."

She went on to lament a transatlantic divide shaped by "latent antagonism" and America’s view that it alone could save civilization.

"They see themselves as defending civilization. The barbarians are outside the gates," she said describing the attitude of many Americans, who believe, that as long as "God is on its side," nothing can go wrong.

"Americans have gotten used to seeing the world in terms of enemies. Terrorist is a more flexible word than communist," the author of Polish-Lithuanian-Jewish descent told the audience.

Sontag, who has spent much of her literary life going back and forth between Europe and the United States, questioned why Europe and America had drifted so far apart. Criticizing Bush’s "imperial program," she lambasted Defense Secretary Donald Rumsfeld’s division of Europe into old and new.

The author, who was in Germany at the time of 9/11, described the outpouring of sympathy the Europeans felt for the United Sates, but said much of it had been squandered since then. "What has followed is an increasing estrangement on both sides."

"How odd, that when Europe and America are so culturally similar, there is such a divide," she added.

For an author who has made a career out of wielding her pen for political causes, such critical statements are nothing new. Sontag has used her intellectual reputation to draw attention to injustices around the world. From the Vietnam War to the death threat against writer Salman Rushdie, the Israeli policy in the Palestinian territories or the bombardment of Sarajevo, Sontag’s critical voice has always sounded loud and clear.

In her refusal to shy away from controversy when it comes to speaking out against war and conflict, Sontag serves as a "role model for intellectuals," according to the writer and theater director Ivan Nagel, who gave the laudation on Sunday. With her fiction and political essays, Sontag questions and defends "the concept and the value of western civilization."

The Peace Prize, which comes with a cash award of €15,000, has been awarded by the German Bookseller’s Association every year since 1950. It is given in recognition of an individual’s lifetime work in the fields of literature, art or science which contributes to the promotion of peace. Other illustrious recipients include Hermann Hesse, Vaclav Havel, Jürgen Habermas, and last year’s winner Chinua Acheba from Nigeria.

In recognition of his work as a pioneering African novelist and moralist, the German Publishers’ and Booksellers’ Association has awarded its peace prize for literature to the Nigerian author Chinua Achebe (Oct. 13, 2003).

The Ukrainian writer, poet and musician Serhiy Zhadan has won the 2022 Peace Prize of the German Book Trade for documenting the struggles of his compatriots caught up in a brutal war.