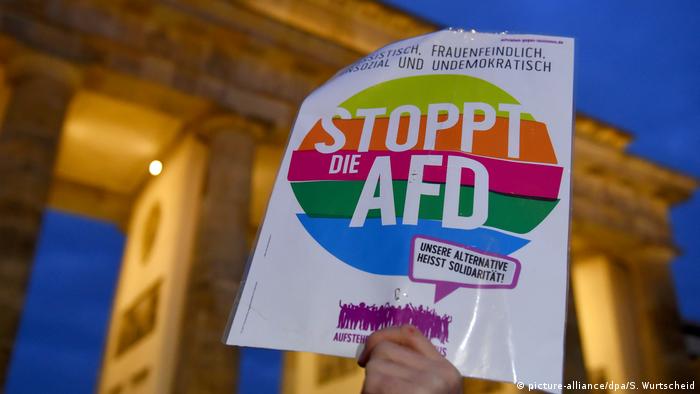 The majority of Germans believe that the far-right party Alternative for Germany (AfD) is partly responsible for right-wing extremist violence in the country, a survey taken the day after a deadly attack on two hookah bars in Hanau showed.

According to research done by the Kantar Institute and published in Bild am Sonntag on Sunday, 60% of respondents agreed that the AfD is partly responsible for instances of right-wing extremist violence such as took place in the city near Frankfurt last week.

Late Wednesday evening, a 43-year-old German man in Hanau killed nine people of foreign descent, seemingly motivated by a xenophobic worldview. He was later found dead in his apartment, along with his mother.

Only 26% of the survey's respondents did not think that the far-right party, which has been represented in Germany's parliament since 2017, is partly responsible for such acts of violence. Another 14% were undecided.

In addition, 46% of respondents thought that German security authorities don't pay enough attention to the dangers posed by right-wing extremism.

A total of 502 people were interviewed for the survey, which was conducted the day after the attack in Hanau.

AfD falls in the polls

According to a poll published Saturday by the Forsa Institute, support for the AfD has fallen two percentage points since the attack on Wednesday, from 11% to 9%.

On a national level, the AfD is Germany's third-largest party and the leading opposition party.

AfD state leader in Thuringia Björn Höcke raised an outcry on Twitter on Thursday with a tweet he wrote condemning the attack.

"Madness seems to be spreading through this country more and more," he wrote to end his statement.

The tweet garnered nearly a thousand comments — mostly angry ones — accusing Höcke and the AfD of failing to own up to the role the party has played in stoking racist sentiments in Germany.

On Saturday, police in Stuttgart announced that two windows had been shot out of a building complex where a hookah bar was located. An employee of the bar discovered the damaged windows and alerted the police.

The motive for the crime is not currently known. State investigators have taken over the investigation.