Suicide bomber kills policemen in Russia | Europe| News and current affairs from around the continent | DW | 06.01.2010

A suicide bomber in the Russian republic of Dagestan killed at least six in an attack on a police station in the capital, Makhachkala. The North Caucasus has seen a rise in violence in the past year. 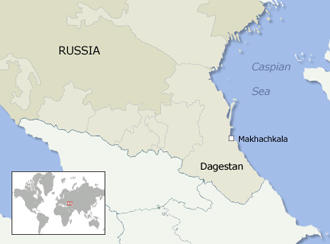 Violence has risen sharply in the North Caucasus republics

A suicide bomb attack in Dagestan, in the North Caucasus, killed six police officers and injured at least 10 others on Wednesday, with Dagestan's emergency medical center saying those numbers were likely to rise.

The attacker, reportedly driving a car packed with explosives, blew himself up outside traffic police headquarters in Makhachkala, the capital of the Russian republic.

Makhachkala's police chief said the bomber detonated the explosives at the gates to the station after a squad car had prevented him from driving through.

"The officers gave their lives to prevent a terrorist attack with an even greater number of victims," a police official told the Russian Interfax news agency.

Russia's predominantly Muslim republics in the North Caucasus have seen a sharp rise in violence in the past year, with many of the attacks targeting pro-Kremlin police and Russian security forces.

Wednesday's bombing was similar to an August bombing in a neighboring republic that killed 24 people and injured more than 200.

Authorities are looking for the perpetrators of a train attack which killed at least 26 people, wounded more than 100, and brought up fears of a new era of terrorism in the Russian heartland. (29.11.2009)