A suspected Boko Haram suicide bomber blew himself up during a religious procession of hundreds of Shiite Muslims. Local religious leaders said at least 21 were killed in the latest violence to hit the troubled region. 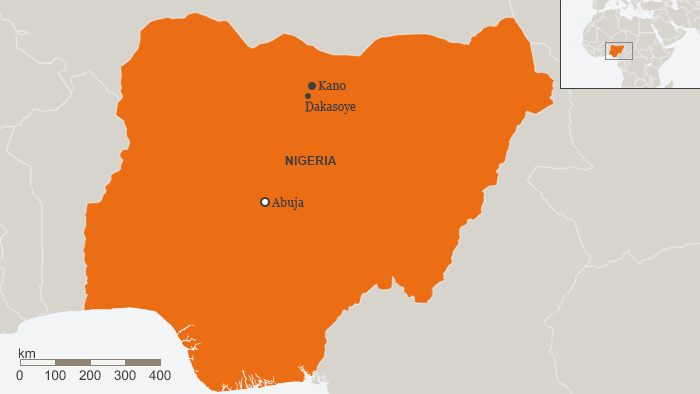 The attack happened in the village of Dakasoye, some 20 kilometers (13 miles) south of the city of Kano, during a march by followers of the Islamic Movement of Nigeria. Boko Haram, the radical jihadist organization that wants to create an Islamic state in northeast Nigeria and some neighboring territorities, has previously been blamed for attacks on Shiite Muslims in the region.

Aliyu Yusuf Kakaki, spokesman for the Shiite community in Kano, told The Associated Press news agency that at least 21 people were killed and 40 more injured during the attack, which took place during the annual Arbaeen procession from Nigeria's second-largest city to the ancient Islamic city of Zaria.

Kakaki said that a second suicide bomber was detained before detonating the explosives he carried.

Police commissioner Muhammadu Katsina confirmed the suicide bombing took place and said he had visited the scene, but did not comment on a death toll. It can sometimes take several hours for the extent of damages from such attacks to become clear.

The organizer of the procession said that the bomber had detonated his explosives only after realizing that his accomplice had been arrested.

In November 2014, at least 15 people were killed and some 50 others injured in a suicide bombing targeting the Shiite festival of Ashura in the city of Potiskum, in Yobe state.

In April 2015, a suicide bomber targeted a group of Shiite Muslims outside an open-air mosque in the same city, killing himself and wounded three worshippers.

The extremist Sunni movement Boko Haram considers Shiites as heretics who should be killed.

Boko Haram has increasingly been using suicide bombers against civilian targets since the start of a military offensive earlier this year that has pushed them out of their controlled territory. Nigerian President Muhammadu Buhari told Deutsche Welle earlier this year, after his election, that he hoped for Boko Haram to be defeated by the end of 2015; a timeline that might prove too optimistic.

The human rights organization Amnesty International estimates that a total of 20,000 people have been killed in the past six years during Boko Haram's uprising in northeast Nigeria. The United Nations says that the ongoing insurgency is costing 200 million euros ($212 million) annually in aid, while at least 2,4 million people were displaced and four million were facing famine.

President Muhammadu Buhari has fired his top military chiefs as he scrambles to defeat Boko Haram militants, who are waging an intensified campaign of violence against civilians in Nigeria and neighboring states. (14.07.2015)