A day after the deadly attack on a Shiite mosque, a NATO convoy has been targeted by Taliban militants. Authorities have yet to offer figures, but have confirmed there were casualties. 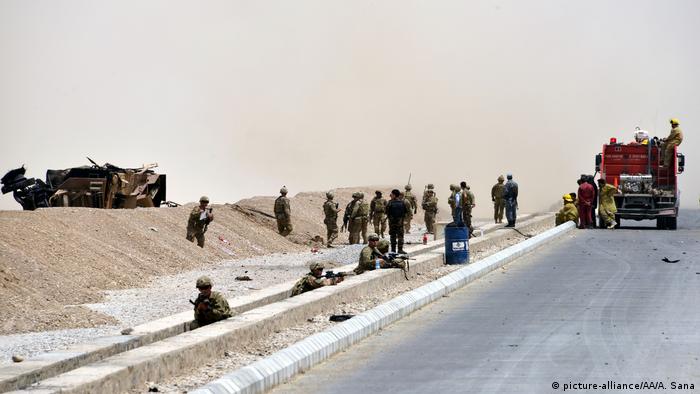 A suicide bomber on Wednesday attacked a convoy of international forces in Afghanistan's restive Kandahar province, the NATO-led coalition said in a statement.

"At around noon, a car bomb targeted convoy of foreign forces in the Daman area of Kandahar," a provincial police spokesman told AFP news agency.

The mission confirmed the attack did "cause casualties," but did not offer further details.

At least one witness claimed to have seen three bodies being pulled from one of the military vehicles.

The Taliban militant group claimed responsibility for the attack, with spokesman Qari Yosuf Ahmadi saying it took place near an Afghan intelligence facility.

The attack comes a day after 29 people were killed when one attacked detonated a suicide vest and another lobbed grenades into a Shiite mosque in the western city of Herat, according to media reports. However, the Taliban did not claim responsibility for that attack.

Afghan security forces – with non-combat support from international forces – have failed to stop a resurgent Taliban.

In Kandahar, the situation is even more so dire. The Taliban managed to bolster its presence in the poppy-growing province, which a UN report published earlier this year described as one of the most dangerous places for civilians in Afghanistan.

Read more: Afghanistan: 'This war cannot be won with bombs'

Meanwhile, the "Islamic State" (IS) militant group has also created a small but significant presence, although its leader was killed in July.

There are approximately 13,500 troops comprising the NATO task force in Afghanistan. However, the White House has considered sending roughly 4,000 troops – or more – to the conflict-ridden country in attempt to quash the Taliban.