An official Sudanese investigation said that 87 people were killed when security forces broke up a protest in June. The probe's death toll sparked fresh anger, with protesters saying the toll was much higher. 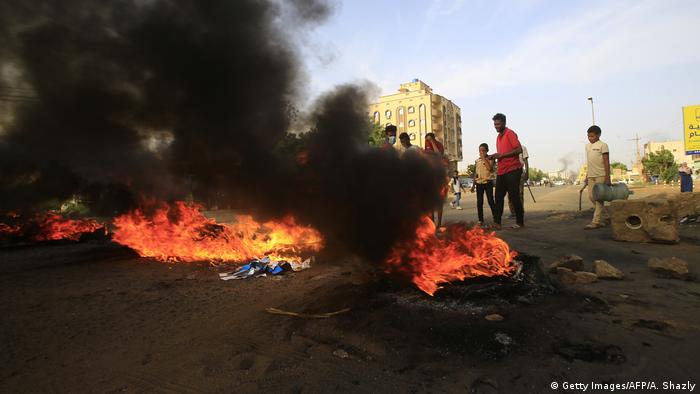 Prosecutors in Sudan announced the results of an official probe on Saturday into a widely condemned crackdown on peaceful protesters in June, reigniting public anger.

Fathel-Rahman Said, the head of the investigative committee, said 87 people were killed when security forces violently cleared a protest camp on June 3 in the capital, Khartoum. He added that 168 people were wounded, 48 of whom were hit by bullets.

While the death toll is higher than the Health Ministry's previous estimate of 61, protesters say at least 127 people were killed and 400 were wounded.

Protesters had been holding a sit-in outside the military's headquarters since April to pressure the military council to hand over to civilians following the ouster of President Omar al-Bashir.

After the release of the probe's findings, hundreds of protesters once again took to the streets of the capital on Saturday.

"The martyrs' blood is not gone! We wear it as a scarf!" demonstrators said as they barricaded roads and set fire to tires.

In certain neighborhoods, police fired tear gas and stun grenades. Unlike in previous demonstrations, Sudan's security forces were not seen.

Prosecutors also said that the country's generals did not order the deadly crackdown and instead placed blame with paramilitary forces, saying they exceeded and violated orders.

Said told a press conference that security forces were only told to clear a high-crime area near the protest camp, but not to break up the protest itself.

Members of the paramilitary Rapid Support Forces (RSF) then violated orders, with one officer ordering his forces to whip protesters.

Said added that eight RSF officers, including a major general, have been charged with crimes against humanity.

The opposition coalition Forces for Freedom and Change (FFC) has rejected the committee's findings, calling for an independent inquiry.

Protesters also rejected the probe's finding that "no cases of rape" had taken place during the crackdown, despite reports from local medics saying women had been raped.

The violence was strongly condemned by the United Nations Security Council, and led to a breakdown in talks between protest leaders and the military.

rs/se (AFP, AP, Reuters, dpa)Every evening, DW's editors send out a selection of the day's hard news and quality feature journalism. You can sign up to receive it directly here.