Students in Italy protest university budget cuts ahead of Senate vote | Europe | News and current affairs from around the continent | DW | 22.12.2010

Italy plans to restructure its university system in a major way, eliminating several courses and departments. Students have taken to the streets to protest against the bill, calling it nothing more than a budget cut. 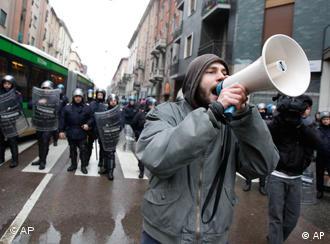 Students across Italy took to the streets on Wednesday to protest against planned government reforms to the university system. Police in the capital, Rome, were out in force after last week's protests turned violent.

Prior to the marches, however, protest organizers pleged to avoid confrontation with police. While the city center of Rome remained peaceful, students occupied a stretch of a highway leading out of the capital. Protests in Milan and Sardinia proceeded without major violence.

But students in the Sicilian capital, Palermo, clashed with law enforcement officers as they tried to enter a local government building, some of them threw stones and bottles at police.

With official youth unemployment figures between 25 and 35 percent, Rome student Claudio Rizzo told Reuters Television that students were not going to stop mobilizing. 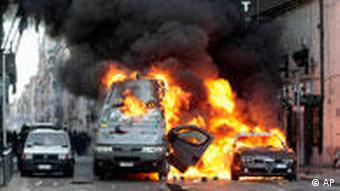 "It's not only a mobilization against university reforms but of a generation that is making itself heard again over the politics of the country, the issues we face and the precarious situation in which we live," he said.

Wednesday's nationwide action was to protest against plans by Berlusconi's government to revamp Italian higher education by merging smaller universities, getting rid of several courses and academic departments and increasing the role of the private sector in university governance.

The bill's supporters say Italian universities are not effective in preparing graduates for the work force and that the reform would save money and improve education. Education Minister Mariastella Gelmini wrote in a letter to the Corriere della Sera newspaper that the reform "is essential to restore dignity and usability to Italian university degrees."

But critics say the reforms amount to nothing more than budget cuts for a system of higher education that is already underfunded.

"We are asking for this bill to be blocked and for the whole public education system to be refinanced," said a statement from Student Network, an alliance of several student groups.

Italy's Chamber of Deputies, the lower house of parliament, approved the reforms earlier this month. The Italian Senate debated the bill on Wednesday and is expected to approve it later this week.

Rome left picking up the pieces after violent protests

Protests against proposed cuts to the Italian education system continued for a second day. Students swarmed the Colosseum and occupied the Leaning Tower of Pisa. (25.11.2010)

The first in-person summit since the coronavirus pandemic began will address the global economic recovery, rising energy costs and supply chain problems. The weekend talks are set to be accompanied by large protests.