Strike in India hits banking and transport sectors | Asia| An in-depth look at news from across the continent | DW | 28.02.2012

A day-long nation-wide strike staged by 11 trade unions in India remained peaceful and evoked a mixed response, but key sectors like banking and transport took a hit in various parts of the country. 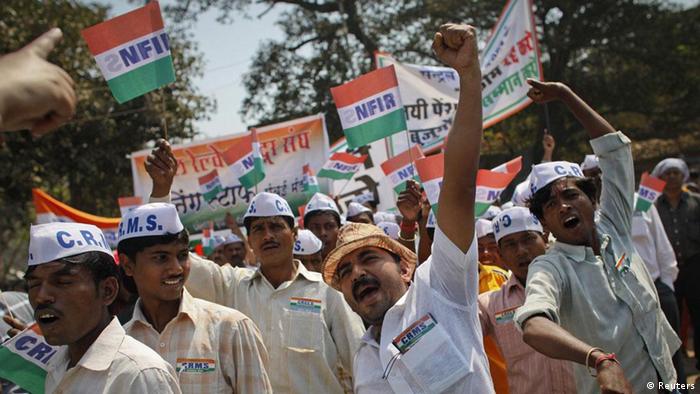 Rajinder Khurana, a 36-year-old bank clerk working in the government-owned State Bank of India in the capital was up early on Tuesday. The previous night he and his colleagues had prepared elaborate placards demanding an amendment to the Minimum Wages Act and an increase in gratuity payout.

Khurana was among the hundreds of employees who picketed the bank's entrance dissuading employees from coming into office even as a tight police cordon ringed the bank premises. All clerical staff and non-supervisory staff were on strike, while officers reported for duty. 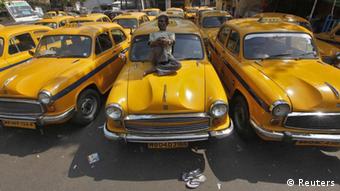 Many taxi drivers suspended their services to participate in the protests

“We have come together to voice our protest against price rise, breach of labour rights and the government's free market policies like disinvestment in public sector companies,” Khurana told Deutsche Welle.

Millions of others like Khurana joined the call for tighter labor laws and a minimum wage in a strike that crippled banking services across the country and affected different modes of public transport.

A large number of rickshaw and taxi drivers kept their vehicles off the roads in many parts of the country to take part in the protest.

“I had to pay double the fare to take a rickshaw as most of the rickshaw drivers were on strike. They charged exorbitant rates,” exclaimed Swati Chandan, a daily commuter.

This is perhaps for the first time in recent memory that trade unions affiliated with most of the mainstream political parties have come together to voice their protest against rising prices and warn the government against its "anti-labor policies." 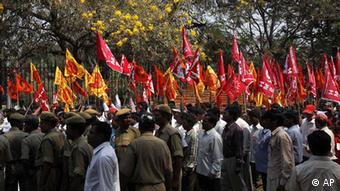 Normal life was affected in states like Kerala, Odisha and Tripura while the strike had a mixed response in West Bengal, where the ruling Trinamool Congress government pulled out all the stops to neutralize the strike. The Punjab, Chandigarh and Haryana states witnessed disruptions in banking and transport sectors.

Gurudas Dasgupta, leader of the Communist Party-backed All India Trade Union Congress and one of the main organizers of the strike, told Deutsche Welle that over 5,000 other smaller workers' unions from different trades had joined the protests.

“This unity among unions has been achieved because everyone is clear that they have been affected by the government's anti-labor policies. I hope this sends out a big and loud signal to the powers that be,” he said.

“We tried reasoning with the government but they would not heed our demands. What option did we have? The strike has been total and is a show of unity,” G. Sanjeeva Reddy, President of the Indian National Trade Union Congress, the ruling party's trade union, told Deutsche Welle.

The other demands by the striking unions include a universal social security net for all unorganized sector workers through creation of a national social security fund, enforcement of basic labor laws and stringent action against violation of such laws.

The strike could not have come at a worse time for beleaguered Prime Minister Manmohan Singh, whose second tenure in office has been embroiled in corruption scandals, inflation and poor growth rates. 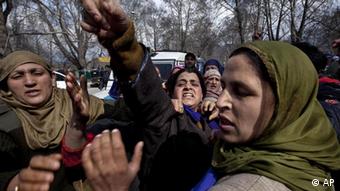 The strike is the 14th general strike since 1991

Crucial election results in five states are due next week. If the Congress fares badly, it will clearly put Manmohan Singh in a tight spot and will be a test of his popularity and his policies,” political analyst Manish Jain told Deutsche Welle.
With the strike proving to have its desired effect, the government may now have to rethink its proposed sale of stakes in state-run companies when it presents its annual budget on March 16.

Tuesday's strike is the 14th general strike since India opened up its economy with major reforms in 1991. It is also the fifth time that the present government had to face such nationwide strikes since returning to power in May 2009.

Human Rights Watch has urged India to do more to protect fundamental human rights. It has also said the EU should press India to improve protection which is central to a strategic partnership. (14.02.2012)