Street Children on the Rise in Germany, Aid Agency Warns | Germany | News and in-depth reporting from Berlin and beyond | DW | 05.01.2007

Street Children on the Rise in Germany, Aid Agency Warns

The number of children living on the street in Germany is growing, according to the charity terre des hommes. The increasing disparity between rich and poor, as well as diminishing family structures, are to blame. 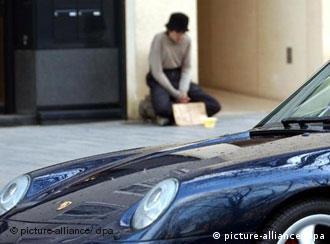 The gap between rich and poor is dramatically affecting German society

Germany is one of the wealthiest countries in Europe. Yet thousands of children are living on the streets, according to the children's relief organization Terre des Hommes (TDH).

"We have observed this development in Germany for the past 10 years," TDH director Peter Mucke told the newspaper Neue Osnabrücker Zeitung on Thursday. "In this time, the number of street children has grown significantly."

Mucke quoted statistics by the German Ministry for Family Affairs, which estimates that there are up to 7,000 children living on the country's streets.

The gap between rich and poor is growing

Mucke said the problem was particularly pronounced in larger cities, such as Hamburg and Berlin, where tdh also has projects for street children.

According to Mucke, the growing gap between rich and poor in Germany was to blame.

"It's a similar phenomenon as in developing countries, in which a few profit from growing wealth and, at the same time, a lot of people become poorer," Mucke said. He added that weakening family ties and stability also played a role.

If this situation continued, a ghettoization of the rich could result in Germany, Mucke said. This was already the case in many developing countries. 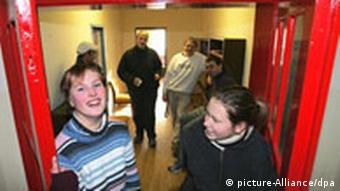 Organizations like the Lindenhaus in Dresden give shelter to homeless youth

"There, the rich often live completely insulated from the poor," Mucke said. "This results in a downright break in society."

Some 2.5 million children under the age of 18 live below the poverty line in Germany, according to government figures. The Federal Statistics Office warned last month that a further 1.7 million children are in danger of falling into poverty, largely due to their parents' unemployment.

Osnabrück-based TDH Germany celebrates its 40th anniversary on Monday. It was founded on Jan. 8, 1967, to help children injured in the Vietnam War. The Terre des Hommes movement was started in Switzerland in 1960.

"The images of the war in Vietnam robbed us of our sleep," said founding member Lutz Beisel. "We wanted to help quickly and found doctors, hospitals and foster parents to take care of these children." The initiative brought Vietnamese children to Germany for treatment.

Today, TDH Germany supports around 500 projects in 25 countries in Africa, Asia, Latin America and Germany. In 2005, it received 25.9 million euros ($33.9 million) in donations.

Charity associations are demanding that unemployment benefits be raised after the Federal Statistics Office announced that 13 percent of Germans are in danger of falling into poverty, largely due to unemployment. (06.12.2006)

"We Can't Afford to Leave Kids by the Wayside"

The German parliament's Commission for Children's Concerns has discussed including children's rights in the constitution. In light of recent cases of deaths due to neglect, it's becoming a pressing issue. (22.11.2006)