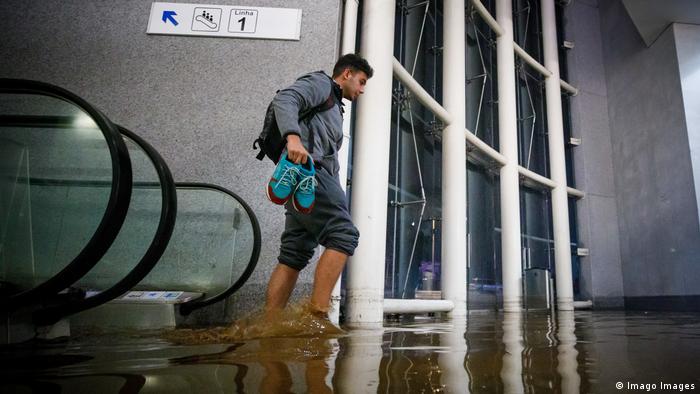 Storm Elsa hit southern Europe on Wednesday before increasing in intensity later on Thursday. It will be followed by a second storm, Fabien.

One man died when his house collapsed in northern Portugal on Thursday, while another was crushed in his truck by a falling tree near Lisbon. 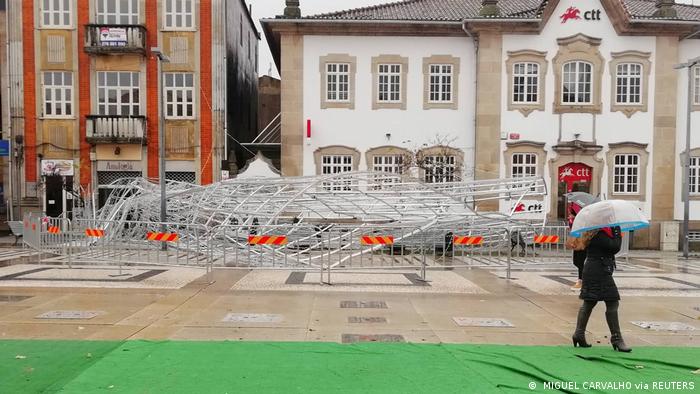 A Christmas tree lies on the ground after crashing down during storm Elsa in Chaves, Portugal

Three others died in Spain on Thursday and Friday: one killed by a collapsing wall, one swept away by floodwaters and one in a landslide.

Nearly 140,000 people have been left without power in southern France, while 17 others were evacuated from a building which had its roof ripped off by high winds.

Storm Fabien is expected to pack even higher wind speeds and create more damage in southern Europe over the weekend.

Portuguese civil protection commander Pedro Nunes forecast that weather conditions would worsen on Friday evening and through the night.

Deadly floodwaters have inundated parts of southwestern France, leaving two dead and several others injured. Authorities have evacuated hundreds of people living near the convergence of two rivers. (15.12.2019)

The government had evacuated some of Mayotte's quarter-of-a-million inhabitants and told locals to stock up on water. But the storm ultimately veered south, sparing the island of the worst damage. (08.12.2019)

Record temperatures across Europe have claimed many lives in Spain and Portugal alone, the UN health agency said. Wildfires in the two countries and parts of Europe only worsened matters.

Scorching temperatures and raging wildfires have already forced the evacuations of thousands of people in Portugal, France, and Spain. The heatwave is expected to continue in the coming week as well.

After two years of lost income due to the COVID-19 pandemic, bars and hotels in Spain and Portugal are facing a different issue: less and less people want to work seasonal jobs in the service industry.