Germany's wind energy industry had a good year in 2012, but there are clouds on the horizon. Government policy and international market developments might make 2013 rather more difficult. 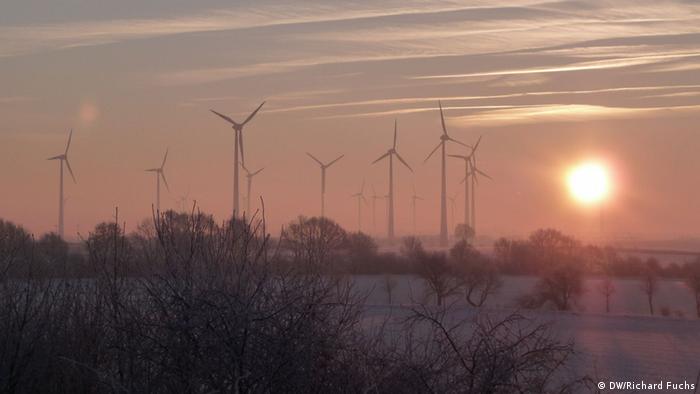 For the wind energy sector in Germany, business in 2012 was good. By the end of the year, a total of around 23,000 wind turbines throughout the country were producing electricity - 1,000 more than in 2011.

The accumulated output rose by 20 percent to 31,300 megawatts, equal to the electricity production of 40 large coal-fired power plants.

For the mostly German and Danish wind turbine manufacturers this meant good business. But despite the increase in the number of units, the amount of electricity they contributed to the grid merely remained stable. According to Sylvia Pilarsky-Grosch, vice president of the German Wind Energy Association, "We didn't produce more electricity in 2012 with wind energy than we did in 2011." And one of the reasons for that was that there simply wasn't enough wind. 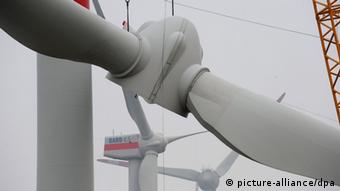 Wind turbines are getting larger - and supplying ever more power

In Germany, almost half the new wind turbines on land end up in the coastal regions of the northern states of Lower Saxony or Schleswig Holstein. In 2012 though, regions in the south that are traditionally less windy were able to catch up: Bavaria and Rhineland-Palatinate saw some heavy investment in wind energy.

But there's still concern about the further development of offshore wind parks in the North and Baltic Seas, considered by many to be beacons of hope for the whole industry.

Even though many of them are already finished and - in theory - functional, there are still problems with connecting them to the grid.

In 2012, only 16 offshore wind turbines successfully started operation, bringing the total amount of electricity production offshore up to 280 Megawatts. Work is slow: around 350 units are still awaiting completion and incorporation into the grid.

German government plans to harvest 10 gigawatts of electricity from offshore wind parks by 2020 are therefore looking rather over-optimistic.

Waiting for the global market to collapse 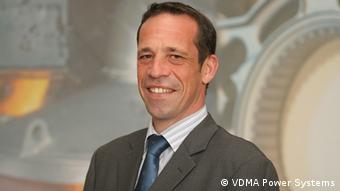 Herdan fears that 2013 could be difficult, at home and abroad

Businesses across the sector still predict a constant level of growth for the development of German wind energy in 2013 - especially on land, says Pilarsky-Grosch.

By the end of the year, she says, this could boost wind-powered electricity production to up to 35,000 megawatts.

It's a development against current global trends, says Thorsten Herdan, head of VDMA Power Solutions, the lobby group for German machine and plant engineering: "Germany is like a rock in the current turbulence that the global market is facing." During 2013, he says, he expects the global market to shrink by 10 percent.

Among the reasons, according to Herdan, are the poor outlook in the US market and an increasing sealing-off of the Chinese market for foreign manufacturers.

The VDMA expects sales in the US to plummet by more than half compared to 2012, while new installations in China could stay stable at 14,000 megawatts. There's a current overcapacity in the worldwide industry, and that is likely to set off a downward spiral in prices.

What is even more worrying than the global market, according to manufacturers, is German government policy.

On the one hand, after years in which renewable energy has benefitted from government subsidy, Herdan says there are scarcely any politicians left who fundamentally oppose green electricity. On the other, the latest plans for reforming the subsidies on renewable energy proposed by Environment Minister Peter Altmaier could potentially poison the climate for investors in future wind projects, both large and small.

Altmaier's plan suggests a cut in the subsidies for renewable energy, in order to reduce the burden on private households, for whom electricity prices have risen by 13 percent.

Under current regulations, renewables have to be prioritized in supplying the grid, even though they are more expensive than conventional power. They enjoy a guaranteed price and that has contributed to the increase in consumer costs.

Altmaier wants to impose retrospective cuts on subsidies which have already been agreed and to reduce government support as a whole. This, according to Herdan, is a direct attack on the industry and potential investors: "Breaking legitimate expectations will completely destroy any confidence among investors to invest on any given legal basis," Herdan says. He feels that, if the environment minister gets his way, the domestic market too could be a problem for manufacturers in 2013.

In order to take advantage of high wind speeds on the open seas, the race is on to create wind turbines and wind farms that float on the surface of the water. But, the jury is still out on which is the best method. (23.01.2013)