Reeva Steenkamp was scared of Oscar Pistorius at times, the South African court holding the Olympic sprinter’s trial has heard. The revelations came in messages retrieved from the phones of both Pistorius and Steenkamp. 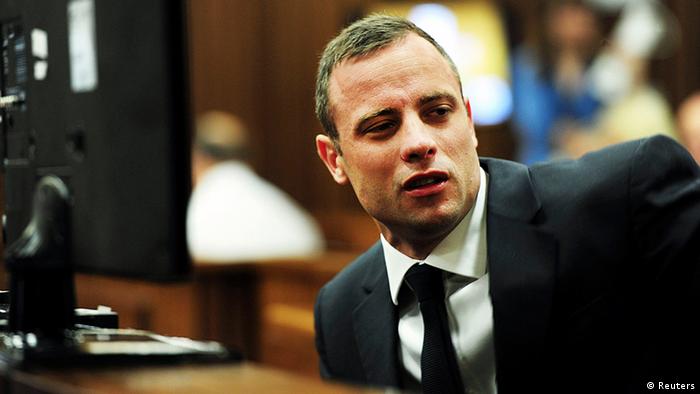 On Monday, as the trial entered its fourth week, the prosecution introduced evidence from both phones found in the bathroom where Steenkamp was killed. Double-amputee Pistorius, 27, is accused of the premeditated murder of Steenkamp, his girlfriend, in the early hours of February 14, 2013, buthas pleaded not guilty. His defense team is also contesting three gun-related charges.

More than 1,000 exchanges between Pistorius and Steenkamp were obtained from the latter's phone by investigators, with South African Police Captain Francois Moller estimating around 90 percent were normal and "loving" in nature.

But in several read out by Moller to the court, Steenkamp said she was "scared of [Pistorius]" at times. "I can't be attacked by outsiders for dating u AND be attacked by you, the one person I deserve protection from," she wrote in another message. Pistorius apologized for his behavior in one reply, saying he had been tired, sick and hungry.

The prosecution had struggled to gain access to the locked phone of Pistorius, who has said he had forgotten its access password. In a bid to use its data for evidence, investigators had traveled to the United States to meet with the makers of the phone.

Screaming 'did not stop'

Earlier on Monday, a witness said she heard gunshots as well as screams from both a man and a woman on the night Steenkamp died. Anette Stipp, a neighbor of Pistorius, described hearing shots and then "a lady screaming, terrified, terrified screaming."

"The screaming continued, it did not stop," she added. The testimony of Stipp and her husband matches that of two other neighbors.

Steenkamp was shot four times through the bathroom door by Pistorius, who claims he thought it was an intruder. But police experts have testified Steenkamp was first hit in the hip and then in the arm, which would have given her time to scream before she was then shot in the head.

Pistorius' defense claims it was he who was screaming, maintaining Pistorius fired in a quick burst that gave Steenkamp no time to do so herself.

The prosecution will finish its case against Pistorius this week. The defense will then present its case, with the trial to continue to May 16 due to a recess in April.

With no trial by jury in South Africa, Judge Thokozile Masipa will pronounce Pistorius innocent or guilty and will decide on any sentence. If convicted, prosecutors say they will seek a life sentence - the strictest punishment available in the country. A life sentence would require Pistorius, who ran at the London 2012 Olympic Games and is a six-time Paralympic gold medallist, to spend a minimum of 25 years in prison.