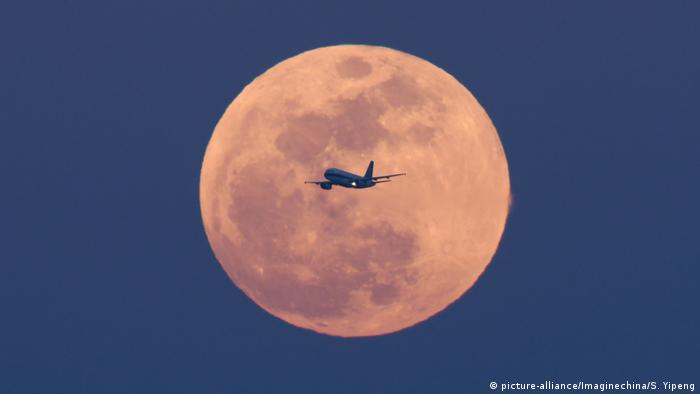 Flying during the last year has been rewarding, eerie and sometimes lonely

For Marc, a young pilot flying with a European national flag carrier, one of the strangest things about his job during the pandemic has been the silence.

"When you are flying over London for example, that is one of the busiest airspaces in the world," he told DW. "And now you don't hear or see any other plane in the sky, which usually would be absolutely jammed with other airlines talking and everything happening. All of a sudden, it is dead quiet on the radio. It's eerie."

Not that he has much opportunity to take in the strangeness. Since March 2020, he has only flown on average two return trips per month. His wages have been slashed and he has seen less experienced colleagues, and those working in cabin crew positions, fall into financial difficulty. And he calls himself one of "the lucky ones."

His pandemic flying experience has ranged from flying an entire plane with a single passenger aboard — "which is just bizarre; you are kind of thinking: 'What is the point of this?'" — to flying in vaccines and other essential equipment.

"With that, there was a feeling that you are contributing," he said. "A big problem when you are not working is that you feel a bit helpless: 'What am I doing? Can I help anyone out?' So that feeling that you are helping out the country a bit ... and even talking to the passengers we did fly, they were mostly flying essential journeys, meaningful journeys. Just the fact that we were able to do that was rewarding." 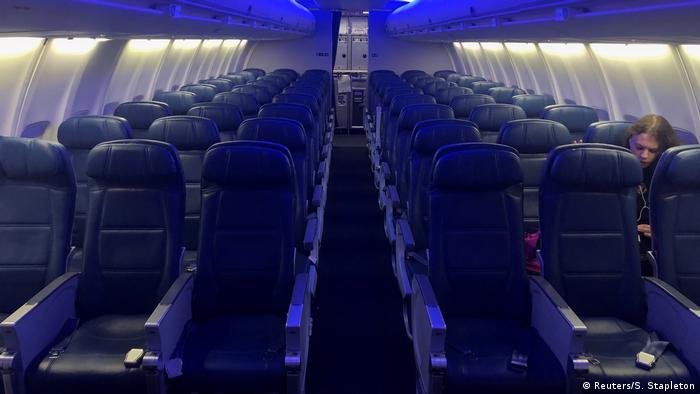 Many scheduled flights over the past year have been practically empty

Marc spoke to DW on the condition that his airline would not be mentioned because "job security isn't really great these days." Like many in the sector, he is worried about what the past year will mean for his profession in the future.

From flying vaccines or medical equipment around the world to helping passengers make essential journeys during the pandemic, aviation's essential role can hardly be argued with.

Government support of the aviation sector is a serious bone of contention at present, though, from multiple perspectives.

The COVID-19 pandemic has led to unprecedented upheaval in the industry, and airlines have lost mind-boggling amounts of revenue (see graphic). The crisis has led to a dramatic pivot after years of privatization, with governments pumping ever-larger amounts of state aid into national carriers. 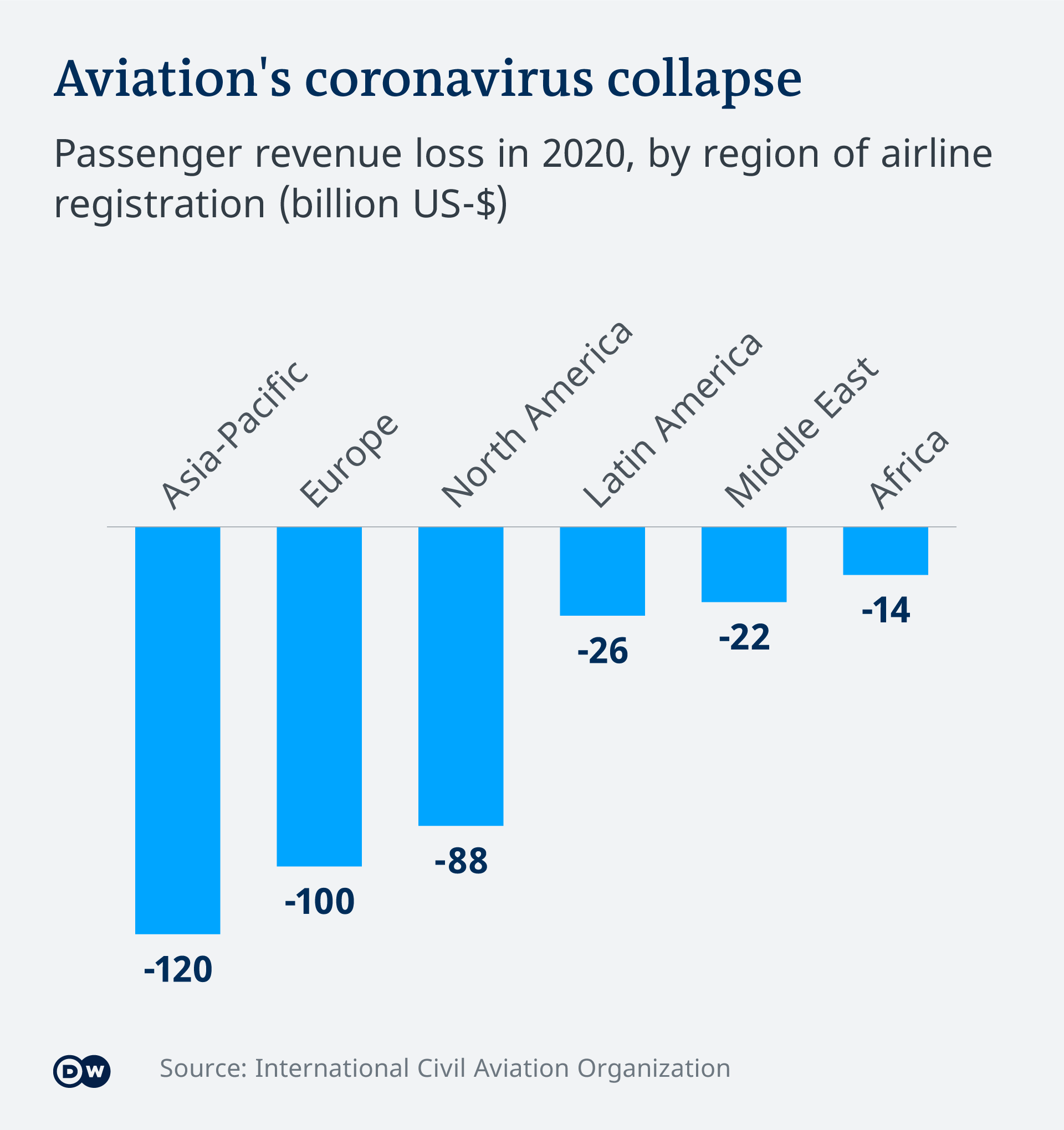 The trend has been especially strong in Europe. Italy nationalized Alitalia early on in the crisis, while last month, the French government upped its stake in Air France-KLM to 30%. In Germany, the government spent €9 billion ($10.9 billion) on a 20% stake in Lufthansa, and the Swedish and Portuguese governments have also taken stakes in SAS and TAP Air Portugal, respectively.

It's not only flag carriers who have had to tap new resources. Even Ryanair, the leading critic of the European bailouts, accepted special pandemic financing in the form of a $730 million loan from the UK government.

Yet, though dozens of airlines across Europe have availed of liquidity through a range of government offerings, there is a clear dividing line.

According to the European airline bailout tracker run by Greenpeace and environmental groups Transport & Environment and Carbon Market Watch, European governments have already given about €30 billion in financial aid.

Of that amount, close to half applies to just two airlines: Lufthansa and Air France-KLM, while other national carriers added together account for the vast majority of remaining funds dispersed.

The European Commission gave the green light to the funding but attached conditions, such as forcing carriers to give up prized airport slots.

But Ryanair CEO Michael O'Leary is furious and has been typically blunt in what he sees as unfair state aid. He said airlines such as Air France would never pay back the billions given to them by governments and that the deals are unfair to airline groups such as his. 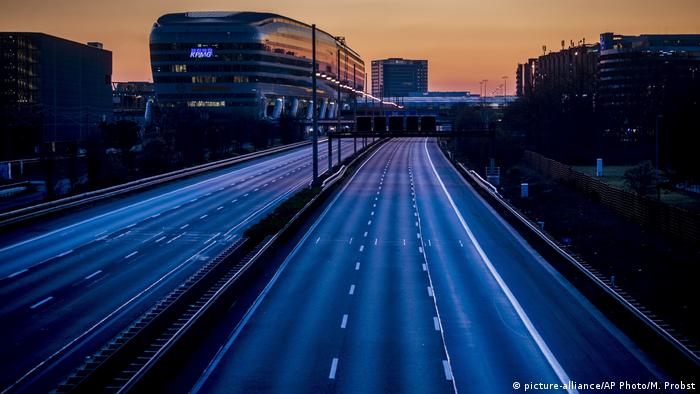 "We, easyJet, IAG and the others have to compete with these state-aid, crack cocaine junkies," he said.

Ryanair launched a legal battle against state aid in various European courts. The common thread in the argument is that the kind of support received by Lufthansa and Air France-KLM is discriminatory. On Wednesday, the European Court of Justice ruled in the budget carrier's favor.

The court annulled the European Commission's approval of financial aid awarded to KLM by the Dutch government and a separate bailout for Portuguese carrier TAP.

What the bailout situation means for the future of aviation in Europe is a matter of serious debate. Some analysts take the view that ultimately, airlines that survive the pandemic without state aid will become more efficient and more competitive in the longer run.

Others take the opposite view. "For many airlines, the absence of government support could ultimately mean disaster, especially for the large carriers," Shukor Yusof, the founder of aviation consultancy Endau Analytics, told Bloomberg. Ryanair itself has echoed similar sentiments. 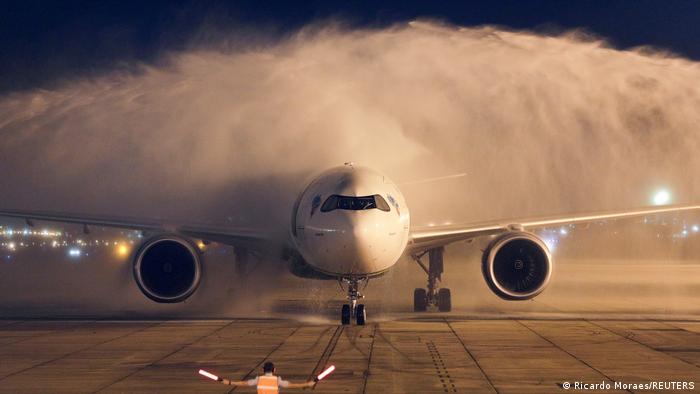 There is another side to the entire question and that relates to the environment and the need for EU governments to reduce carbon emissions, with aviation an obvious heavy contributor. Greenpeace launched its tracker to highlight the extent to which governments have bailed out airlines without strict environmental conditions.

"Injecting taxpayers' money into this very polluting industry with no environmental strings attached makes no sense at all," Greenpeace transport policy adviser Lorelei Limousin told DW. "Returning to normal is really not an option."

She said Greenpeace was not opposed to public support for airlines, but that billions of public money should be directed toward supporting workers and the fight to reduce emissions, rather than simply to put pre-pandemic volumes of planes back in the air.

Airlines argue that the massive daily cash burn caused by having airplanes on the ground makes such an approach impossible in a pandemic.

That points towards the many valid but competing claims at the center of the debate on aviation's post-pandemic future, whether it is airlines striving to thrive or simply survive, environmentalists looking to reduce emissions, or pilots and cabin crew looking to get back to work in the clouds again.

Africa's airlines have registered low passenger volumes since the onset of the COVID pandemic. The aviation industry's progress in connecting the continent over the past decade is now at stake.

The European Union has approved a plan to prop up Air France amid a pandemic-induced collapse in passenger numbers. In return, the airline must give up some flight slots to competitors.