"All of us were incredibly nervous," recalls one of the people who witnessed DW's very first broadcast in 1953. The spring sun, of all things, put the premiere in jeopardy and perplexed DW experts. 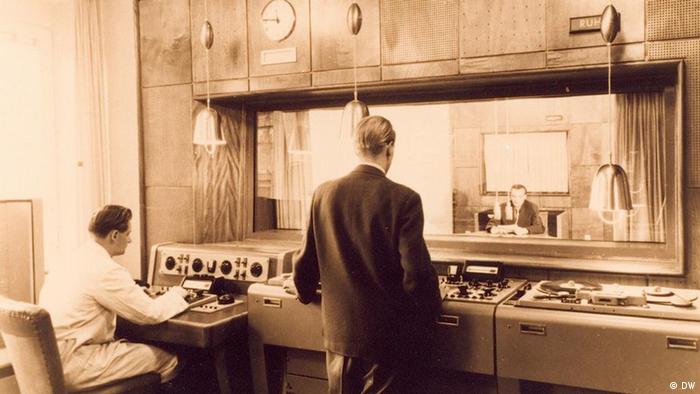 On May 3, 1953, Germany’s new international broadcaster went on air for the first time from a studio at Northwest German Broadcasting (NWDR): "This is Deutsche Welle. You are listening to us via a directional antenna towards the Far East in the 25-meter band on 11,795 kHz. Deutsche Welle broadcasts this program on behalf of the broadcasting institutions of the Federal Republic of Germany. You can listen to us every day from 11:30 am to 2:30 pm Central European Time."

It was a sunny and unusually warm spring day. That afternoon in Cologne, the thermometer showed 27 degrees Celsius. Those involved in this milestone event of German broadcasting history saw the weather as a good omen. Anneliese Wilke, an editorial assistant at the time, recalled this day perfectly 25 years later: "I still remember that all of us were incredibly nervous. In the preceding weeks we had carried out simulations, trying out ways of producing news and seeing how to best put everything together and what content to include. And then finally the big day came. I was so nervous. I thought to myself: something ground-breaking is happening here."

In studio 17 at NWDR, Editor-in-Chief Hans Otto Wesemann - who later became the first DW Director General - was following the opening speech of German President Theodor Heuss, which had been recorded the day before, with great interest. Editors Hilde Stallmach and Christian von Chmielewski were with him, as were music editor Erich Winkler, program manager Edith Neuenfels, as well as Karl Schulz, technical director at NWDR, and Horst Krieger, DW's technical manager. 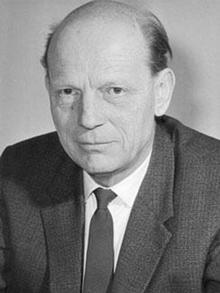 But then the first technical obstacle appeared. The same cheerful rays of sunshine that lit up the room were shining directly on the machine with the rotating audio tape. It began to melt in the heat and a brown, sticky layer began thickening around the equipment. The consequences could soon be heard: the German president's voice was increasingly distorted and his pauses for breath became tediously long.

A quick solution was needed, but none of the experts called in for help knew what to do. Von Chmielewski recalls this situation with some amusement: "It's rare to see technical gurus look so helpless. Karl Schulz bent down over the tape, remained unmoving for a quarter of a minute and then silently stepped back. His deputy, Walter Werner, tried to manipulate the tape with the nail of his little finger. Beads of sweat formed on his forehead - he wanted to increase the pressure on the tape but failed. Horst Krieger took his turn and blew as hard as he could on the melting tape but the sticky mass didn't budge. Meanwhile, the sound engineer kept away, cleverly remaining in the background." The president's voice continued arduously on, with those gathered casting increasingly worried glances at the thickening gluey layer. Finally, the German president closed his speech: his farewell words were only just audible.

In the end, the sticky tape could be removed, the machine cleaned and a new tape inserted. Ludwig van Beethoven's "Eroica" symphony was played in full length. An excerpt from one of Beethoven's works also became DW's interval signal - a few bars from the composer's only opera, "Fidelio." The melody was chosen by NWDR Director General Hanns Hartmann, who followed the advice of South German Broadcasting's head, Fritz Eberhard, to "choose a distinctive excerpt from German music that is familiar to as many people as possible in the German-speaking world." The only other choice would have been the famous wartime song "Lili Marleen," Hartmann joked at the time, before finally picking "Fidelio."

After "Eroica", Viennese waltzes were played, followed by traditional May songs and the first part of the "How we live" series, a portrait of the city Berlin. The 15-minute radio show began with a report about a merry gentlemen's outing to the Grunewald forest in West Berlin accompanied by a hiking song that was repeatedly interrupted by the cry "Halt!" - a word that residents of West Berlin associated with the Allies' signs at the border crossings between the city's various sectors.

The spirit of innovationDriven by the spirit of innovation, the program was expanded in the following weeks based on spontaneous ideas and discussions that involved German artists and writers. Christian von Chmielewski recalls: "Heinrich Böll came by and delivered book reviews - for the people out there, as he put it. [...] People from the theater and media world also gave us ideas. Due to the limited studio space and the great necessity for dialogue, some discussions about programming took place in the basement or in the canteen. Conversations were conducted over beer or cake and coffee. Whenever he could, Hanns Hartmann, head of the broadcaster, would sit in the corner and play Skat with the editors. People still spent time together then."