Only a few dozen people remain at the anti-pipeline camp. After Donald Trump approved the Dakota Access Pipeline last month, activists are now pinning their last hopes to halt the project on a lawsuit. 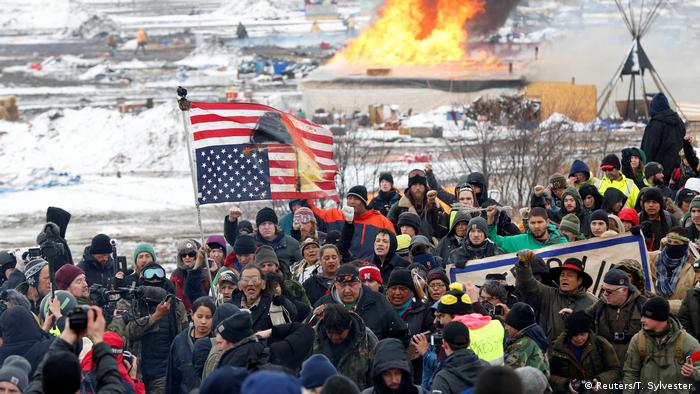 The camp set up by Native American activists and environmentalists to protest against the construction of the Dakota Access Pipeline (DAPL) was cleared on Wednesday.

Most of the few hundred people left at the protest site in North Dakota exited the camp without resistance, carrying banners, praying, chanting and drumming, after police pressed them to leave. On their way out, some of the protesters set fire to camp structures as part of a leaving ceremony. An estimated 10 people were arrested for allegedly defying police orders.

Last week, North Dakota's governor, Republican Dough Burgum, had issued an emergency evacuation order, saying that the upcoming high water season and an increased danger of ice jams posed safety risks to the people staying at the camp. Floating ice can gather at obstructions in a river or stream, blocking the water flow and potentially creating flash flooding upstream, or flash flooding downstream when it later melts. 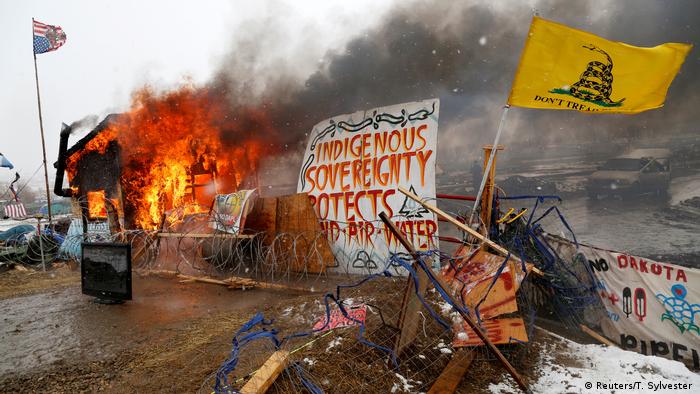 Protestors burned many of the structures at the camp before leaving

An estimated 25 to 50 people remained in the camp after the evacuation deadline Wednesday afternoon. Burgum, who is among the proponents of the pipeline project, said that the remaining protesters would "have every opportunity again to leave tomorrow without arrest." A clean-up crew was set to start work at the site on Thursday morning.

The so-called Sacred Stone Camp was set up by the Standing Rock Sioux tribe with the help of other Native American tribes and environmentalists in mid-2016. At its height, the protests near their reservation drew up to 10,000 protesters and captured the attention of Social Media users worldwide under the slogan #NoDAPL. Those opposed to the DAPL said that it violated the integrity of land considered sacred by the Standing Rock Sioux and that it threatened the drinking water in the regions surrounding the 1,886-kilometer (1,172-mile) underground oil pipeline.  DAPL would carry fossil fuel across four states, from North Dakota, where it is captured through hydraulic fracturing ("fracking"), to a pipeline hotspot in Illinois, where DAPL would connect to a network of other pipelines that transport oil to different states. The Standing Rock reservation is located just south of the planned route. The tribe sources most of its drinking water from a lake that crosses the pipeline.

Construction on DAPL was temporarily paused in September 2016 after President Barack Obama ordered a construction halt, but resumed after newly inaugurated President Donald Trump issued an executive order permitting the construction of the DAPL, along with another controversial pipeline project, Keystone XL.

#NoDAPL activists are now pinning their hopes on a lawsuit filed by the Standing Rock Sioux Tribe along with the Cheyenne River Sioux Tribe. On February 13, a judge refused their request to halt the DAPL construction, but another court date is set for the end of the month.