Dozens of people are dead and several escaped prisoners are at large following a major prison riot in Sri Lanka. The prison holds some former Tamil rebels, but it is not clear whether they played a role in the violence. 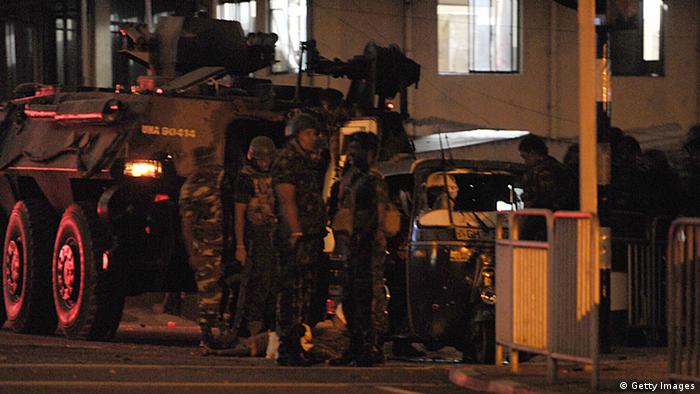 The death toll in a prison riot in the Sri Lankan capital, Colombo, rose to 27 on Saturday, according to the country's prison minister.

"Sixteen bodies are at the hospital and another 11 were found in the prison today," Chandrasiri Gajadeera said in a statement. "I have appointed a three-member committee to investigate the incident."

Those injured included the commanding officer of Sri Lanka's elite police, the Special Task Force (STF), who was in intensive care, said the head of Colombo National Hospital.

The army wrestled back control at the Welikada prison before dawn on Saturday, following a riot that erupted overnight, jail and military officials said.

Concern is now swirling about six escaped prisoners authorities are searching for.

The violence broke out when the STF tried to conduct a search for drugs and illegal mobile phones in the prison.

"When they were coming out, prisoners started to attack them with stones. The STF used teargas and the prisoners fired at the STF," police spokesman Prishantha Jayakody said.

A prisons commissioner also told Reuters that rioting inmates had broken into the armory and seized weapons, including machine guns.

Colombo's prison holds around 4,500 inmates, including former Tamil rebels who belonged to the Liberation Tigers of Tamil Eelam. The LTTE fought a drawn-out war of independence that ended in 2009 without success. Officials said it was not clear whether any of those particular inmates had played a role in the uprising.