Sri Lanka fences in humans to protect its elephants | Environment| All topics from climate change to conservation | DW | 16.01.2012

Sri Lanka fences in humans to protect its elephants

Elephants and humans have fought for the limited land in Sri Lanka for decades. A clever solution gives each their space by putting the people in reserves rather than the elephants. 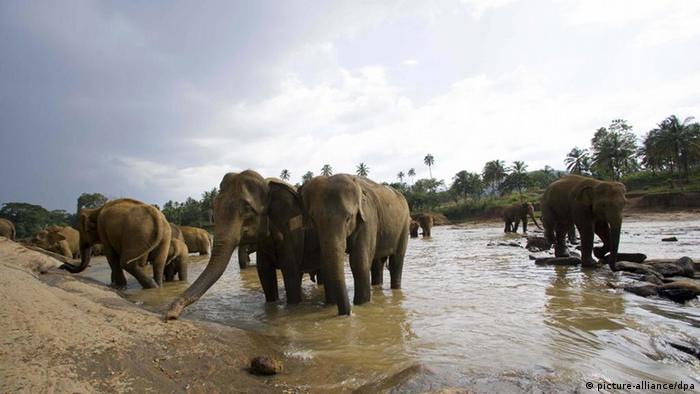 Each elephant needs a lot of room, about five square kilometers

In the central Sri Lankan village of Randunne Wewa, Angie Magilin Nona recalls her terrifying encounter with an elephant.

It was the middle of the night and the family was sleeping when the animal tore through the side of her mud brick house, trashing anything in site.

"I am angry at the elephants," says Nona. "They destroyed the coconut trees, ate all the rice, they broke all the furniture…they destroyed everything."

It's not an isolated experience on Sri Lanka, an Indian Ocean island where 10 percent of Asia's elephant population competes for room with 25 million people emerging from the ashes of a three-decade civil war.

Though Nona was lucky to escape with her life, it's elephants that are coming off second best in their struggle with humans.

Yet, unlike the peace ushered in with the defeat of Sri Lanka's Tamil Tiger separatist movement in 2009, accommodation with elephants needn't mean their destruction.

Conservationists are coming up with new ways to soothe what they describe as the "human-elephant conflict."

"The essence of the whole human-elephant conflict is basically that people have encroached on elephant habitat," says Ravi Corea, president of the Sri Lanka Wildlife Conservation Society. 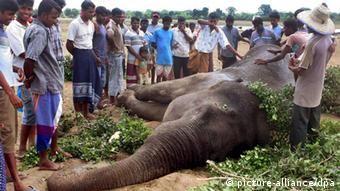 The fight for land pits farmer against elephant, one of Sri Lanka's most iconic animals

The conflict has reached dire proportions. Corea says every year some 220 elephants are killed out of a population of 5,000. Sri Lanka has lost three quarters of its elephant population over the last century.

Farmers trying to protect their crops sometimes kill the elephants, which can trample a cultivated field and destroy a farmer's livelihood in a matter of minutes.

"This creates incredible antagonism towards the elephant, especially by marginalized farmers," says Corea.

In some cases, the loss of habitats causes these usually gentle animals to become aggressive, Corea says. They've injured and even killed people whom they view as a threat.

At one village in Wasgamuwa, in central Sri Lanka, farmers remember when elephants used to destroy their crops.

"In those days people looked at the elephant with anger," said villager Athula Kumara. "We considered the elephant an enemy, that's the way we looked at it. Back then, people would shoot and do other things to harm the elephants."

But today Kumara doesn't worry about the elephants. The Sri Lanka Wildlife Conservation Society has created an elephant sanctuary in Wasgamuwa where humans and elephants co-exist peacefully.

Here, instead of fencing in the elephants, they've fenced in the villages. Kumara's village, Wehereagalagama, is protected by a solar-powered electric barrier that Ravi Corea designed. 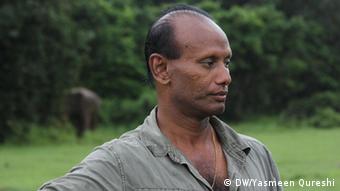 "National park boundaries only make sense to people," Corea says. "It's not an ecological boundary for any other animal in the park. They don't know the park starts here and something else starts on the other side."

Athula Kumara says the fence has changed his life.

Elephant attacks on houses have stopped and harm to crops has declined drastically.

According to Corea, the village has doubled its farm production and income has increased threefold. Meanwhile, the elephants are able to roam freely.

Devaka Weerakoon, a zoologoy professor at the University of Colombo, says that what Sri Lanka needs is better land management.

"We have about 600 kilometers (374 miles) of fences in this country," Weerakoon says.

"Some of them are in the middle of the forest because that happens to be the boundary between the forest department and the wildlife department. You have elephants on both sides of the fence, which is a ridiculous situation. These kinds of fences are useless."

Weerakoon has been working to soothe tensions between humans and elephants for years. He says one of the biggest obstacles is government apathy. 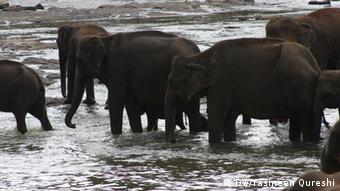 Elephants are not always a priority in post-war Sri Lanka

"We are only scientists. We can only do research and come up with recommendations, but the right to implement them lies with government agencies."

Unfortunately, he and his colleagues petitioning has had little impact.

"We have not been able to push them to do or try out some of the new things we are proposing," he says.

As the nation struggles to recover from a civil war that raged for almost three decades, the government's top priorities are developing infrastructure and tourism.

"The elephant is not an artifact. It's a living symbol, a living icon that represents many things that are very important to us Sri Lankans," he says.

"It's naive on our part, to think of development and leave the elephant out of it, or consider the elephant some kind of obstacle or challenge for us to develop."

For Corea, elephants are one of Sri Lanka's most important national assets.

After 30 years of civil war, Sri Lankans decide on the best ways to develop their economy. Tourism could bring money to the country, but some fear it ignores the island's biodiversity and locals' interests. (21.12.2011)

A team of scientists says hominids lived in Europe as recently as 7 million years ago, based on a discovery in Bulgaria. The find lends credence to the idea that part of modern human evolution occurred outside of Africa. (12.01.2012)

Authorities in Malaysia have seized a contraband shipment of elephant tusks and ivory artifacts worth an estimated four million ringgit (1.3 million US dollars) en route to Cambodia. (13.12.2011)

Listen to the report on Sri Lanka's elephants