Squirrel Goes on Bloody Rampage, Injures Three | News and current affairs from Germany and around the world | DW | 14.06.2007

A squirrel with aggression issues acted out in the southern German town of Passau, injuring three people before his last victim finished him off with a crutch. 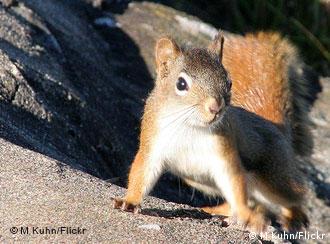 He might seem cute, but look out! He could be a killer

The Bavarian town of Passau, on the Austrian border, is usually a fairly quiet place, with man and nature living in relative harmony. But this week, the bucolic balance was thrown off when a squirrel went berserk, terrorizing three in a biting rampage that ended only with his death.

His first victim was a 70-year-old woman, who was sitting peacefully in her living room when she was surprised by the sensation of small claws on her back. The squirrel had jumped through a window and onto the woman, soon sinking its teeth into her hand. Acorns weren't on this little guy's mind, arteries apparently were.

Terrified, the woman ran out into the street in a panic, managing to shake the squirrel off.

But the creature, whipped into a frenzy, immediately found another victim. He jumped onto a nearby construction worker, injuring him on the hand and arm. The fellow was finally able to fight the furry demon off with a measuring pole.

Still on the hunt for blood, the tiny terror then ran into the garden of a 72-year-old retiree.

"The squirrel massively attacked him on the arms, hand and thigh," said a local police spokesperson. So the senior citizen used the only weapon at his disposal -- his crutch.

He clubbed the ruthless rodent to death.

How the squirrel obtained his bloodlust is still unclear, although experts have said its behavior could be linked to the mating season or the squirrel could have been diseased.

A Match Made in Heaven? Or Just a Sad Swan Song?

Nearly as closely connected with Germany as beer and sausages, the dachshund is a national emblem on the decline, but experts say there is hardly a danger of the "sausage dog" being woofed out soon. (10.03.2007)

Can the hissing of a hot air balloon startle a brood of hens into near-infertility? A German farmer grappling with dwindling egg production on his farm certainly seemed to think so. But he failed to convince a court. (04.05.2007)