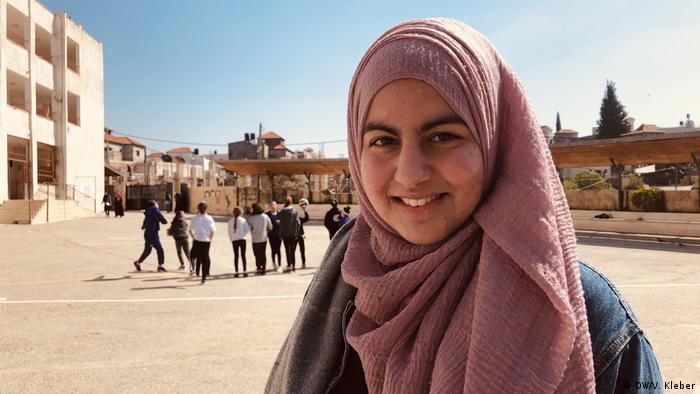 Thanks to Dunia's newspaper article, there are no more teacher cars parked in the schoolyard today

It is a morning like any other at Kuofor Neima, an all-girls school in a village in the West Bank. Loud voices can be heard as the students play basketball or play catch on the playground. A heavy iron gate gives access to the school grounds framed by walls that have been painted by the students. But the playground was not always for playing. Until recently, teachers parked their cars there and for the approximately 550 girls, there was barely room to play.

"That annoyed me," said Dunia, a 16-year-old student at Kuofor Neima. "Wherever there was shade, there were cars parked meaning we could only stand in a small patch of sun. I thought that was unjust and unnecessary because it was always so terribly hot for us."

Dunia documented her anger and urged her teachers to change their behavior in an article published in "Fosool," an MIL newspaper that serves many schools across the territories. She quoted the then headmistress of the school who questioned Dunia's choice to criticize her teachers. This surprised Dunia since she had learned to question things in her Media and Information Literacy (MIL) class.

MIL encourages people to stand up for their rights

"MIL has given me tremendous self-confidence," said Dunia. "Most of all, I've learned not to accept things as they are." 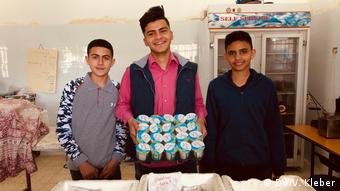 For three years, Dunia and her fellow students had MIL lessons once a week where they learned to fact check the news, write journalistic articles, interview subjects, and produce news reports using their phones. Trainers from Pyalara educated the students in all aspects of media literacy while also assisting the students in writing articles on topics important to them. One of those was about the teachers parking their cars on the playground.

The article caused an uproar. Pyalara recognized this and tried to address the situation with the headmistress. After a copy of the article was passed on to the Palestinian Ministry of Education, the authorities wrote a letter to the school reminding the teachers that parking in the schoolyard is prohibited because it is a designated space for the students. The schoolyard is now car-free and the students are grateful that Dunia wrote her article.

"Examples like this show that MIL influences the mindsets of teenagers," said Hania Bitar, director of Pyalara. "It encourages students to stand up for their rights and articulate their concerns. It's a project that changes the lives of students over the long term."

Over five years, Pyalara has taught MIL to more than 600 students in 25 schools in the West Bank and Gaza. But the conditions in the Palestinian territories are challenging. Both the teachers and the students are confronted with the Israeli occupation on a daily basis as they navigate through checkpoints manned by the Israeli army. Others have experienced attacks by radical settlers in the West Bank or bombings in Gaza. This can leave a deep mark. MIL courses offers students the opportunity to write down and reflect upon what they have experienced.

Sandwiches instead of candy

The boys' school in Nillin, west of Ramallah, is one of the schools supported by Pyalara's MIL project. To get here, one has to drive over the hilly mountains outside Ramallah, along orchards crawling with gnarled olive trees.

"I can tell immediately who took part in the MIL course," said Headmaster Hassan Mousa. "Those students can articulate themselves better and dare to do more."

Three such students are Loyal Sroor, Mohammad Zaidon, and Ahmad Riad who host a radio show every morning that is broadcast on loudspeakers in many Palestinian schools before the school day starts. In the past, only speeches were read on the air. The trio has developed a new format that includes spontaneous interviews with teachers and the headmaster.

The headmaster was once asked why the prices in the cafeteria were so high that some students cannot even afford a sandwich and why there are so many unhealthy snacks for sale.

Mousa felt compelled to respond to the students' concerns. Now the cafeteria also sells cheaper sandwiches and only a few sweets. The pink, gummy strips layered with lots of sugar have since disappeared.

Respect in the digital and real world

There is more at stake than school projects in the Palestinian Territories. Digital change is a major challenge in the region. Never before has it been so easy for young people–across territorial borders–to publicly express their opinions and exchange ideas. However, this freedom made possible through social media can also be dangerous. Digital spaces are mostly controlled by the Israeli secret service as well as by Hamas and the Palestinian Authority. Time and again, young people from the Palestinian territories are arrested or sentenced to heavy fines for acting carelessly on the Internet. 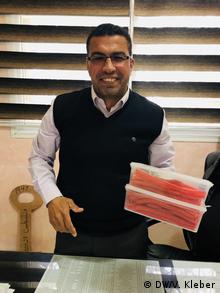 Civil society organizations such as 7amleh, Tam, and Al-Saraja, with the support of DW Akademie, are developing informational campaigns and educational packages on digital rights to make young people aware of privacy and security on the net. As part of the program, young people meet with government representatives in workshops and seminars to discuss the sensible use of social media. Because in such a politically heated environment, there is no room for hate speech and discrimination. A respectful approach–in the digital and real world–is something that headmaster Mousa takes very seriously.

"In our culture, authorities enjoy a lot of respect," said Headmaster Mousa. "MIL teaches students to differentiate respect from criticism so that they can stand up for their rights."

According to Mousa, the students who participate in the MIL courses are not the only ones to benefit. "Critical thinking and creativity can rub off. If you listen to our radio program in the morning, you will notice that other students are coming up with new ideas," he said. The questions being asked were more critical and the students dared to do more. Mousa would like to offer a full MIL program to all his 450 or so students. However, media literacy is not a separate subject. In the current school curriculum, MIL is taught only as part of other individual subjects.

From the classroom to the community

Even outside of the classroom, the thinking behind MIL is being advanced. Five girls from a public school in Ramallah have joined forces to teach their classmates about critical thinking in their free time.
"When your father or your teacher tells you something, it's not always true," said the girls. One of the examples of this is when they learned in class that rap music is forbidden in Islam.

"We researched at home and found out that there are many rappers with a muslim background who even rap about Islam and that rap is not prohibited," added one of the students. 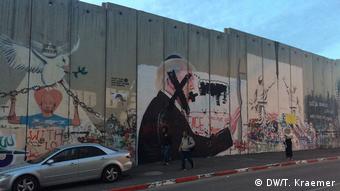 For Palestinians, the wall means a massive restriction of their freedom of movement.

Pyalara was one of several MIL organizations active in the Palestinian Territories in 2013. In the course of its cooperation with DW Akademie, it has grown in recent years into a regional knowledge center. Pyalara is now networked throughout the Middle East and its knowledge and experience with MIL are in high demand in other countries. The organization is often approached by other NGOs for advice.

"We provide Pyalara with technical and content support and we expose them to new trends in the field of MIL," said Verena Wendisch, former DW Akademie country manager for the Palestinian Territories. "Pyalara itself, however, managed to pave the way to a cooperation with the Palestinian Ministry of Education."

Through intense lobbying, Pyalara was able to persuade the ministry of education to integrate MIL into the school curriculum. Even though MIL is not yet recognized as a separate subject, it is viewed as an integral part of other individual subjects. The ministry still has some homework to do. As MIL entered the school curriculum in 2018, many teachers across the country still have to be trained.

"We know it's worth the effort," said Thaer Thabet, the ministry's point person on MIL. "I call MIL the positive virus because it spreads not only from student to student, but also within families and in the community. It's going to change our whole society for the better."

Viktoria Kleber's heart beats for the Arab world. She studied Middle Eastern politics and history and Arabic in Berlin, Tel Aviv and Cairo followed by a traineeship at Deutsche Welle. She works for the ARD in Berlin and in the Middle East team of the Deutsche Welle Akademie. She has currently taken a few months off in order to further her education in London on the topic of media development in conflict and crisis regions.

Markus Haake has been working as country manager for the Deutsche Welle Akademie since May 2019. Prior to this, he worked for several years as a peace expert and team leader in Afghanistan. Over the last twenty years, he acquired consulting expertise at the International Campaign to Ban Landmines and doing humanitarian work in countries in the Middle East, South East Europe and the South Caucasus. 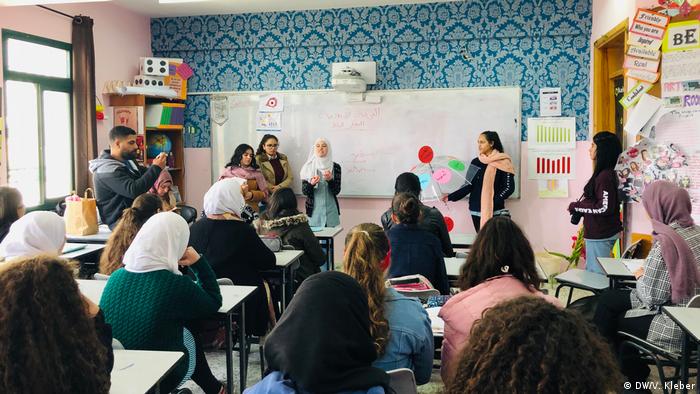