Can religion effectively counter hate speech, propaganda and disinformation in the media? If so, how? 14 Asian representatives of religious organizations took a closer look during a media training in Berlin. 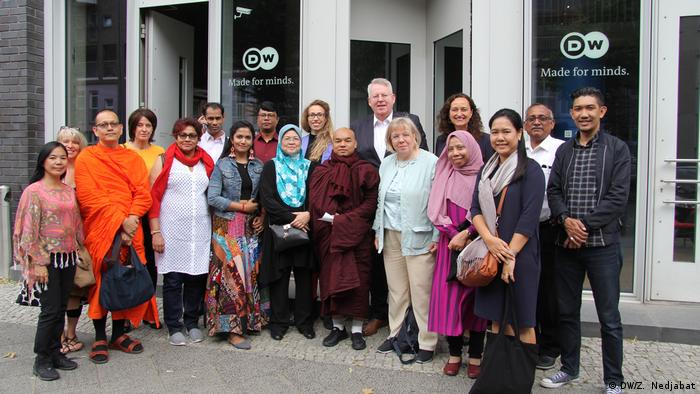 DW Director General Peter Limbourg together with delegates from Asia

"This room is full of positive energy," noted Natascha Schwanke, deputy head of DW Akademie as she welcomed the group in Berlin. The guests were Asian representatives of Buddhism, Islam, Christianity and Hinduism, and all committed to peace and justice in crisis regions.

"As a religious leader and Buddhist monk I feel encouraged by the workshop because religious representatives are often isolated in many countries and don't know how to network with the modern world," said Venerable Napan, founder of the War Saket Institute of Buddhist Management for Happiness and Peace in Thailand.

Funded by Germany's Federal Foreign Office, the five-day workshop held in early July began with a discussion together with Ulrich Schmitz, a brand consultant, and Andrea Rübenacker, managing director of the German Catholic news agency, KNA. Focusing on the premise that religions are the "first megabrands of human history", the discussion led to the responsibility religious organizations can – and must – play in spreading peace messages in today's society.

"The role of religious leaders has changed dramatically. We have to work together, understand the trends and try to master these challenges rather than become passive," pointed out Zaleha Kamarudin, law professor at the International Islamic University Malaysia.

"Have a message, be consistent and respond to questions."

During media training sessions at the microphone and on camera as well as in workshops on strategic communication and social media campaigning, participants worked on new approaches for communicating the values of their religions.

"We want to give people who stand up for the positive strengths of religion the tools for communicating this effectively," said Daniela Wiesler, head of DW Akademie's Media Training division.

An ensuing visit to the Berlin City Mission's Refugio housing project showed how a religious organization can prove itself in the modern world. Participants later took part in a discussion with Joachim Opahle, head of the Berlin Archdiocese's radio and television department, Marcel Sonneck of the Youtuber group "Datteltäter" and Debarati Guha, head of DW's Asia department. Sonneck encouraged participants to "have a message, be consistent, respond to questions and love what you do!"

Participants saw the media at work during a visit to DW TV's studios and posed questions at a lunch with DW Director General Peter Limbourg. They then put into action the insights gained during the five-day workshop, and founded a network with the working title RM4P ("Religion and Media for Peace").

Participant Professor Suphatmet Yunyasit from the Institute of Human Rights and Peace Studies in Thailand praised the workshop:" I've learned how to develop content and reach our target groups in today's world and this is extremely helpful for my work in conflict transformation in southern Thailand."

Volker Berresheim from Germany's Federal Foreign Office underlined the value of knowledge transfer and cooperation in international understanding, especially in areas where diplomacy and politics reach their limits. "Continue your mission," he said to the participants, "because it's a serious and important one."

Training: Get in touch