The premature death of at least 50 one-horned Indian rhinoceroses in the northeast Indian state of Assam has triggered concern among activists who call for improved conservation efforts. 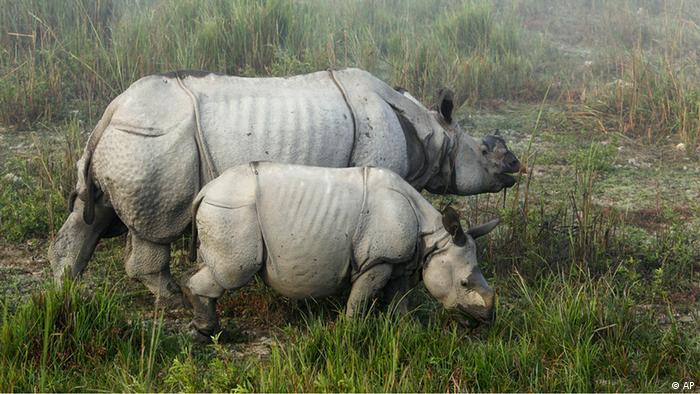 About a year ago, conservationists estimated that there were around 3,200 one-horned Indian rhinoceroses in the world - mostly spread across protected parks in India and Nepal. According to Indian wildlife authorities, Assam's 4 national parks are home to over 2,500, or roughly 80 percent, of the species rhinoceros unicornis.

But in 2012, nearly 30 rhinos drowned in torrential flooding caused by monsoon rains. A UNESCO World Heritage Site, Kaziranga National Park, which is home more than 90 percent of the state's rhinos, lost 18 animals to poachers last year. Another four were killed in the Pobitora, Orang and Manas national parks. 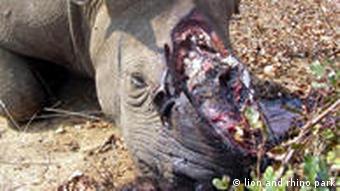 Rhinos are hunted throughout the world for their horns

Director of Kaziranga Park Niranjan Kumar Vasu agreed that the death toll of the rhinos in 2012 was abnormally high in his park and that poachers were posing a grave threat to the animals.

"The poachers do all sorts of things to kill the rhinos. They are able to vanish within minutes after killing a rhino and removing its horn," Mr. Vasu told DW.

From the nineteenth century through the first half of the twentieth century, the rampant poaching of Indian rhinos forced the animal's population dwindle to near extinction.

In 1954 the rhinos got protection in Assam when the state government passed the "Assam (Rhinoceros) Bill" which imposed stiff penalties on rhino hunting.

The conservation efforts have born fruit over the past decades. In 2011, India's rhino population rose to over 2,650 - up from 200 in the 1950s and the conservation of the species was applauded globally as a great success story.

In this context, the loss of 50 endangered animals in one year is a "massive loss," said rhino conservation expert Dipankar Ghose.

"In Assam, between 2001 and 2011, 78 rhinos died prematurely. Now, in a single year, we have so many. It's indeed a high toll and we are extremely concerned," Mr. Ghose, director of Species & Landscapes Programme of World Wildlife Fund-India, told DW. 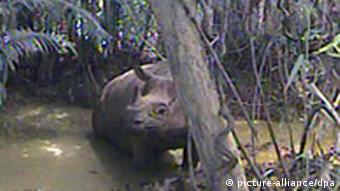 Javan rhinoceroses became extinct in Vietnam in the year 2011

"Smarter management of the reserves can certainly cut the loss of animal lives. The death of as many as 28 rhinos in one season of monsoon floods shows that that the sanctuaries are not well managed."

Ghose added that he was more concerned with the spate in poaching of the rhinos.

"Not a single month passed last year in Assam in which no rhino was poached. It's really a worrisome trend and it's intolerable after so many decades of good sustained conservation work," he said.

Those who kill rhinos for their horns in Assam are usually at the bottom of a chain of organized criminal gangs. International traffickers employ Indian kingpins who pay local tribal sharpshooters to hunt the animals.

Poachers are often armed with sophisticated weapons. To fight them, park guards often operate on shoot-on-sight orders. In the past two decades, more than 100 suspected poachers have been shot dead by guards.

In response to the outcry over the high number of rhino deaths, Assam's Chief Minister Tarun Gogoi recently asked the army to patrol the periphery of Kaziranga Park to keep out the tribal poacher gangs. Assam's wildlife authorities told the local media last month that they were even ready to deploy drones and satellite surveillance to track the poachers. 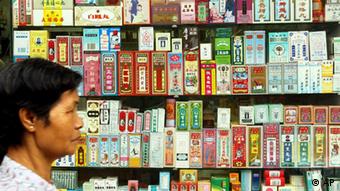 Rhinoceros horns - which are basically made of compressed hair - are used in traditional Chinese medicine as a cure for diseases such as cancer and also to treat a number of ailments such as arthritis and hangovers. Although the horn is no longer listed as an official ingredient in traditional Chinese medicine, it is still used quite often. Some people even simply keep rhino horns as status symbols.

Since 1980s the trade in rhino horns has been banned by the Convention on International Trade in Endangered Species. Yet soaring prices of the horns keep enticing poachers to hunt them.

High demand for rhino horn comes from China and Vietnam, to name just two. People there are paying up to 75,000 euros for an average-sized horn, according to a recent Wildlife Trust of India report.

Indian geckos are in high demand for HIV 'cures'

Tokay geckos are being caught and trafficked from northeastern Indian states to Southeast Asian countries, where many people believe that medicines made from gecko meat can cure diseases such as HIV. (24.10.2012)

Facing their third wave of floods this year, an estimated 1 million people have been forced to flee their homes in the northeastern state of Assam, where authorities have called a health alert. (25.09.2012)

Trade in human flesh reveals a dark side to healing

South Korean officials have launched a crackdown on the smuggling into the country of human flesh capsules. The development marks the latest front in a battle against traditional medicine's more unacceptable practices. (07.05.2012)