Detailing a battle for press freedom at the height of the Watergate scandal, Steven Spielberg's new movie "The Post" echoes loudly today. It's also a strong Oscar contender after picking up a best film of 2017 award. 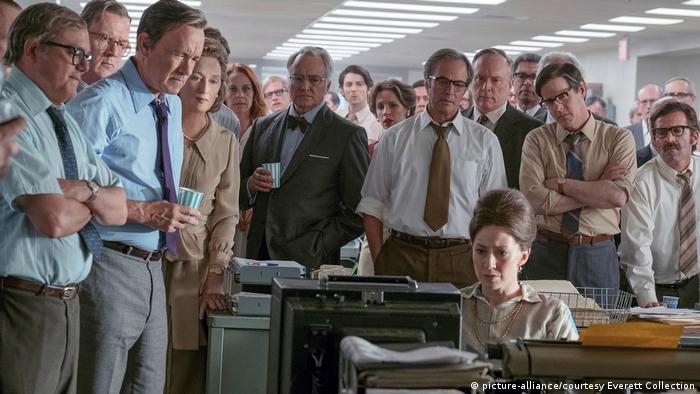 In his latest film about the battle by newspapers to publish the leaked Pentagon Papers detailing the US government's misleading portrayal of the Vietnam War, director Steven Spielberg rushed to get the movie shot and released within a year. His motivation was a need to highlight an alarming echo with the Trump presidency.

"I just felt that there was an urgency to reflect 1971 and 2017 because they were very terrifyingly similar," the Oscar-winning director told a Hollywood audience after a screening of the film on Monday.

"Our intended audience are the people who have spent the last 13, 14 months thirsting and starving for the truth," Spielberg said. "They are out there, and they need some good news."

The film dramatizes the decisions by the New York Times and the Washington Post to publish the top-secret Pentagon Papers about the Vietnam War in the face of injunctions by the Nixon administration — a battle that went to the Supreme Court and ultimately lead to Nixon's impeachment.

Starring Meryl Streep as the late Washington Post publisher Katharine Graham and Tom Hanks as late editor Ben Bradlee, "The Post" on Monday was named the Best Film of 2017 by the National Board of Review, a New York-based group of academics, filmmakers and professionals.

Streep was named best actress and Hanks was voted best actor, setting the film up as an early front-runner for the Oscars. The National Board of Review's last three winners were "Manchester By the Sea," ''Mad Max: Fury Road" and "A Most Violent Year." 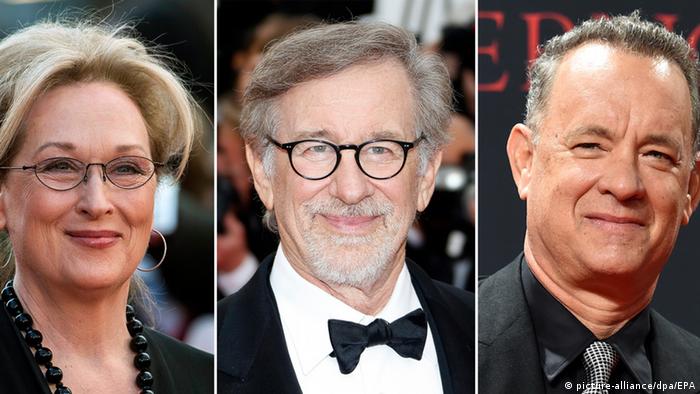 While Spielberg, a prominent Hollywood Democrat, did not mention President Donald Trump in his remarks, his film's strong press freedom message comes at a time when the media has been under repeated attacks from the Trump administration.

Trump has called the press "the enemy of the American people" and uses the term "fake news" to cast doubt on any journalism that's critical of his administration — often without any supporting evidence.

Read more: Presidents always rail against the press, but not like Trump

Before making the film, Spielberg said that he was "really depressed about what was happening in the world and the country."

After receiving the script in February, "suddenly my entire outlook on the future brightened overnight," he said.

"The Post" opens in US cinemas on December 22, and comes to Germany in February 2018.

The UN's Human Rights High Comissioner Zeid Ra'ad al-Hussein says US President Donald Trump may be inciting violence against journalists. He added that the freedom of the press was 'under attack' from Trump. (30.08.2017)

The Press Freedom Index by Reporters Without Borders

The Press Freedom Index is a global annual ranking covering around 180 countries. It reflects the degree of freedom that journalists, news organizations and netizens enjoy. The first edition was published in 2002. (11.02.2015)

Free speech is in a crisis, according to Joel Simon, executive director of the Committee to Protect Journalists. In his book, he outlines several reasons for this situation. (14.04.2015)