Deep within an ancient Roman well, German archaeologists have found a life-size bronze and gold-plated statue of a horse's head. It likely belonged to a larger statue of the Roman Emperor Augustus on horseback. 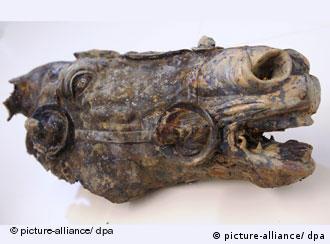 The bronze head is particularly well preserved, making it easier than usual to determine its age

The discovery was made at a site near the town of Waldgirmes in the central German state of Hesse. Archaeologists have been digging at a former Roman town there since 1993 and also recently found the foot of the rider of the horse to which this head likely belongs. But this recent find is particularly significant.

"This bronze sculpture counts among the best pieces to have ever been found from the area of the former Roman empire," said Eva Kuehne-Hoermann, Hesse's minister for science, at the unveiling of the head in Frankfurt on Thursday. "Nowhere else is there a finding of this form or quality."

According to experts, the statue dates from about 3 or 4 BC and probably depicted the Roman Emperor Augustus. Around that time a Roman settlement was established in the area, but several years later at the Battle of Teutoberg, German warriors wiped out a Roman legion. At that time, they probably ritually decapitated the emperor's gilded horse and sunk it in a well.

Such a dramatic gesture would have been important to the conquering Germans, according to Hesse state archaeologist Egon Schallmeyer. "In ancient times, such a statue would have been a symbol that the emperor himself was present," he said.

As an added bonus, it was probably the water in the well that kept the head in such a good state for archaeologists and history buffs today. The restoration will still take about two years, but after that Kuehne-Hoermann said the horse's head and rider's foot would be part of special exhibition in Hesse.

For centuries, wooden houses have been part of Istanbul's cityscape. But many have been destroyed as large swathes of the city have undergone modernization. Now the city is attempting to salvage its cultural heritage. (13.08.2009)

The German archeology institute DEI links science and religion with its excavation projects in the Middle East. Now the century-old organization is getting a financial boost to help recruit and train young archeologists. (21.07.2009)

A legal dispute surrounding an antique golden vase being held in a museum vault in Mainz shines light on the surprisingly important role Germany plays in the often shady world of antiques trading. (30.06.2009)